Why You And I Are Thrilled to Protect Oregon’s People, Pollinators and Places – Again! 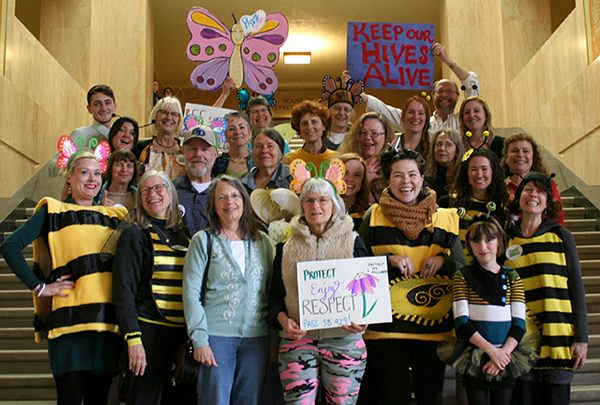 I’m writing this from the bedside of my childhood friend who grew up on the same street as I. Ten days ago she was fine. Today she is transitioning to her passing. Her breathing is ragged, her eyes are unfocused. Her doctors at Stanford University Medical Center told the family they have never seen such a rare and aggressive cancer. They can’t stop it, they can’t even slow it down. 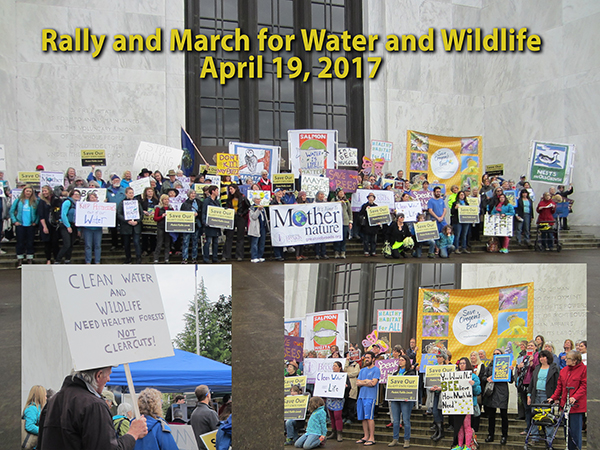 More than 150 people from around the state braved rain and cold to show their support for clean water and healthy wildlife on the capitol steps in Salem.

Perhaps you were at our Rally for Water and Wildlife at the State Capitol last week. We demonstrated to demand that state elected leaders BE LEADERS when it comes to protecting the quality of Oregon’s air and water. I asked the crowd of more than 150 to raise their hands if their family has a loved one impacted by cancer. Nearly every person raised their hands. The ever-rising risk of cancer correlates strongly with toxic pollution in the air you breathe and the water you drink. The World Health Organization and the International Agency for Research on Cancer suggests that air pollution alone is a leading environmental cause of cancer deaths. The mountain of medical research establishing clear links between cancer and exposures to environmental toxics is enough to fill the hallways of the Capitol building! 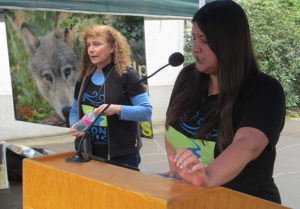 Krystal Abrams introduces Lisa Arkin, one of the rally speakers.

Perhaps you are like me, feeling confident Oregon will be a bulwark against the destructive forces now in charge of the EPA and other federal environmental protections.

But that’s not the way things are working out – at least not yet. Pollinators are left unprotected. Aerial pesticide sprays will continue without accountability. Air toxics won’t be measured.

The good news: our bills got hearings! That is a huge step, reserved for bills that have a fighting chance and could be reintroduced in the next legislative session. The bad news: after the highest hopes for successful passage, I am frustrated to report our 2017 bills were killed in committee.

Here are the three reasons why:

1. The Budget: Oregon has gotten itself into a multi-million dollar deficit. Bills with a “price tag” are being unceremoniously dumped, regardless of their merit. Here’s a secret that the public rarely hears: a state agency can give a bill an astronomical price tag, which is a sure way to stop a bill in its tracks. The Department of Forestry put a price tag of more than $300,000 on SB 892, to expand their online notification system to accommodate advanced warnings of aerial pesticide sprays. An overblown number for sure! The Department of Agriculture put a $70,000 price tag on OPPA, SB 929. That’s more realistic. The whopper was the DEQ’s claim that they needed an additional 6 full time positions to administer the Toxics Right to Know bill, SB 995. That price tag amounts to nearly $700,000. Budget battles (outside of our control) played a significant role in the demise of our bills on pollinators, aerial spray and air toxics reporting.

2. Rampant Industrial Lobbying: Our legislators let themselves fall prey to the same worn-out, old gimmicks by industrial lobbyists, the very same tactics used to fuel the current demise of the US Environmental Protection Agency. After intense lobbying about “job killing regulations” or “fringe environmental agitators,” legislators decided that bees don’t need help to survive the ongoing pollinator crisis. Legislators were somehow convinced that providing advanced warning before an aerial spray is not “fair” to the pesticide applicators. Beyond Toxics brought truth backed by science to the state capitol. We submitted a raft of peer-reviewed scientific studies into the public record – only to hear that a key legislator didn’t bother to read the bill or the record before his NO vote!

3. Sacrificial Lambs: We were told that our toxics reporting bill was “sacrificed” to gain industry’s support for other bills, such as the Clean Diesel bill. That means that lawmakers promised to drop one bill as a bargaining chip to garner support for another bill. Don’t you wonder why any legislator would continue to fall for this ploy? Industry is fighting vehemently against all the clean air bills, as well as trying to block the DEQ air toxics budget! They are eager to accept a “bargain” that will kill one bill, and then demand more bargaining chips for each other bill.

Specifically here’s the wrap-up on our 2017 bills:

Pollinators will be doomed to further die-offs and extinctions. The Oregon Pollinator Protection Act (SB 929) was pulled off the agenda an hour before the committee vote. The bill, an important strategy to reduce bee-killing neonicotinoids, would have removed this class of pesticides from general consumer store shelves. The bill garnered support throughout the State Legislature as well as over 35+ businesses and organizations. Thanks to many of you, the bill’s hearing drew overflow crowds. 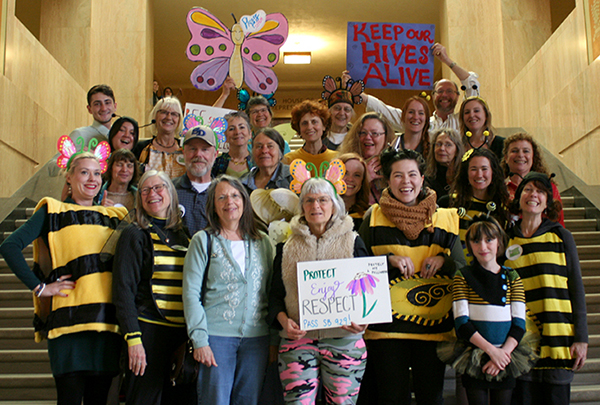 The Bee Protectors at the State Capitol in Salem. In March people from all over Oregon traveled to speak in favor of SB 929, Oregon Pollinator Protection Act.

Legislators left science behind when they succumbed to false claims by Big Ag that “honey bees are making a comeback.” However, the bill does much more than protect domesticated honey bees. Native bees, butterflies and birds need our help now. Aren’t we all shocked to learn that eight species of native bees are declared in danger of extinction? Neonicotinoids are also being found in our food, our drinking water and our bodies, a threat to food justice and health.

Rural Oregonians will continue to be poisoned on their own property and have their property rights denied. Beyond Toxics introduced the concepts for a set of bills comprising the Aerial Spray Protection and Right to Know legislation (SB 499, 500 & 892). The key bill, SB 892, required giving advanced notice to residents of imminent aerial pesticide sprays and required that chemical mixtures be reported five days after the spray. At the public hearing, committee members heard heart-wrenching testimony from folks coming from as far south as Gold Beach and as far north as Rockaway Beach. Senator Dembrow, the bill’s sponsor, worked hard to find compromise, but in the end the key vote, Senator Roblan (Dist. 5 - Coos Bay) voted against the bill, showing his disdain for the science on pesticide drift and for rural residents who have come to the legislature for years begging for relief.

Polluters get to cloak their toxic air pollution in secrecy, while your lungs get clogged. Beyond Toxics’ popular bills to require polluters to report their toxic air emissions (SB 995 and HB 2669) had good hearings, but were two of our “sacrificial bills” that legislators leveraged for support for other environmental bills.

Our bills didn’t advance for political reasons, not because they lacked merit! e will continue to fight hard to pass environmental protections for Oregonians and pollinators, for drinking water and neighborhood air. It means a lot to me, as a grandmother, to ensure that future Oregonians will never ask, “What does a bumble bee look like?”

As I look down on my friend’s face, grey pallor in her morphine-induced sleep, I am hit hard with the reminder that chemical trespass and pollution affects all of us, often in devastating and random ways that change our lives forever. I will fight to make it standard behavior for lawmakers to consider the costs and burdens of environmentally-induced illness first and foremost. It is time to put a halt to the false dichotomy of jobs versus the environment. We are the environment and the environment is within each of us. It is imperative to keep Oregon healthy for the sake of our loved ones.