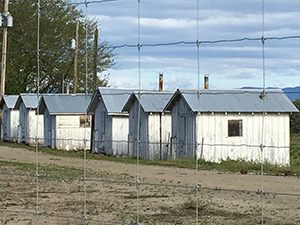 You may be surprised and dismayed to learn that Oregon’s worker protection agency, the Occupational Health and Safety Administration (OSHA), wants to give Oregon farmers “a pass” on following the 100-ft pesticide buffer regulation. In March, during an OSHA policy meeting, Beyond Toxics was only one of two worker advocacy groups present. I was not surprised to see that farmers, agriculture industry representatives and OSHA employees seemed in a big hurry to get this “Oregon Compliance Alternative” option over and done with. Instead of requiring a protective no-spray buffer, OSHA wants to allow “shelter in place,” which is a euphemism for farm workers to cower inside their wooden shacks while aerial and air blast pesticide sprays swirl all around them. “Shelter in place” takes away the 100-ft. no-spray buffer.

If Beyond Toxics had not been present we may have lost the opportunity to call a halt to OSHA's seeming willingness to put farm workers in harm's way. Beyond Toxics sounded the alarm to get other groups to attend the April meeting where Big Ag showed up and met us with more show of force. We knew that a special voice was missing. The voice of the farm worker. 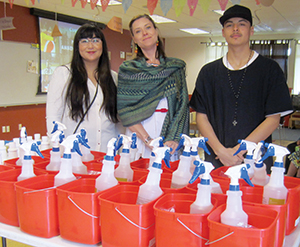 To bring forward the voices of the people most impacted by OSHA’s actions, Beyond Toxics teamed up with Latinos Unidos Siempre (LUS) to give a presentation at a farm worker housing complex just outside of Salem. Both LUS and Beyond Toxics are cohort members of the McKenzie River Gathering Capacity Building Initiative. In April, our two organizations held a joint outreach and training to farm workers and their families around pesticides and health. We thought this would give us the opportunity to recruit farmworkers for the OSHA rule making meetings.

During our time at the training, I met a farm worker whom we will call, Rosa, not her real name. I asked her if she could tell me about concerns she may have as a farm worker. Her first complaint was about not having access to a bathroom. She told me she is regularly exposed to pesticides on her skin and breaths in the fumes while working in the fields. I asked her if she wore gloves. She said the farm owner at a strawberry patch didn’t allow her to use gloves and told her she would be fired if she did. I asked Rosa if I could record her comments so we could present her testimony to OSHA. She said she wasn’t prepared to do that and was very shy.

Rosa’s story is all too common. Those of us who are workers’ rights activists know these stories well. These workers and their experiences are not a figment of our imaginations, although big industry would have you think so. It’s clear that these stories are not reaching the people at the top who make the rules. How do we make sure our migrant farm workers are not exploited or lose their jobs just by asking for minimal protections to protect their health? Right now, in the Age of Trump, the backbone of federal worker protection standards may be unraveled. All signs point to the very real possibility that we may lose the opportunity to ensure a safe and healthy work environment for our workers. How do we combat hopelessness? How do we battle the mindset that the current situation must be accepted because it is simply business as usual?

I’m worried that it’s only a matter of time before OSHA buckles under the pressure of Big Ag bullying. It would be best if farm workers could testify to help us make the case that, as a minimum, Oregon must adopt federal standards. But farm workers everywhere are gripped by fear because of our country’s more aggressive attacks on migrants. “We are very busy just keeping families together,” they say.

Beyond Toxics will push forward and be present and vocal at all the OSHA meetings. We will be there to defend workers’ rights, to be a watchdog for policy development and be prepared to file formal complaints if farm workers continue to be treated as modern-day slave labor.

What can you do? If you are an expert in the areas of agriculture, work place safety, organic farming and/or you are a doctor with knowledge of the long-term effects of pesticide exposure, please contact us at Beyond Toxics. We need your knowledge and expertise. We’ll help you make a difference for vulnerable workers.