Beyond Toxics Endorses Freedom from Aerial Herbicides Bill of Rights 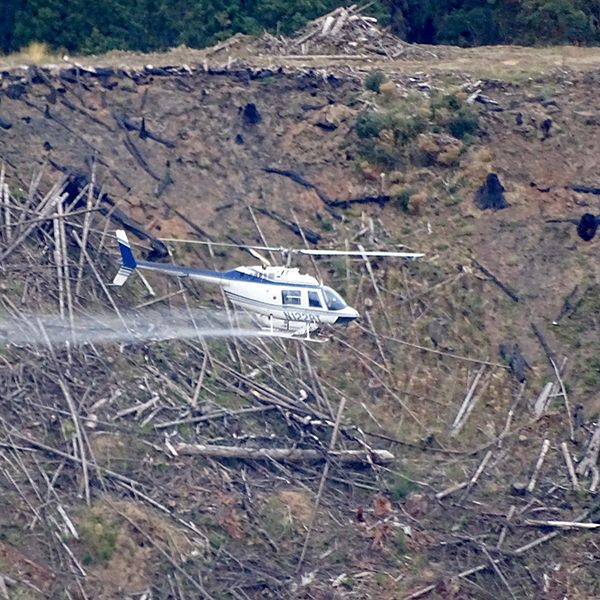 At its August 28th meeting, Beyond Toxics’ Board of Directors voted to endorse the Freedom from Aerial Herbicides Alliance’s charter amendment to ban the aerial spraying of herbicides in Lane County.

I’ve spent more than a decade working side-by-side with rural communities who experience aerial spray drift. No other organization has invested more resources researching forest practices and supporting communities harmed by aerial sprays than we have. Our 2013 report on aerial spraying in industrial timber lands* in western Lane County blew wide open the secretive and dangerous use of helicopters to spray herbicides.

Using data from a public records request, this first-of-its-kind investigation showed the public that the carcinogens 2,4-D and glyphosate, along with endocrine disruptors atrazine and hexazinone, are the top four chemicals sprayed over vast acreages that are also homes to our communities and endangered salmon. We fostered the development of the state’s electronic forestry notification system. With the participation of many rural residents harmed by spray, most notably the residents living around Gold Beach, we introduced legislation in 2015 and 2017 calling for significant reform to Oregon’s forestry herbicide spray rules.

Side-by-side with dozens of poisoned Oregonians and experts alike, our tenaciousness, aided by heart-breaking stories told by rural Oregonians to inspire us, forced the legislature to take action. Still the new regulations are woefully inadequate by any standard. More must be done.

Dozens of communities have raised their voices to demand protection from herbicide drift. Rural Oregonians from Curry to Lane to Tillamook counties share the same experiences: herbicide drift that sickens family members, harms pets and livestock, and poisons the drinking water of cities and homes alike. Appallingly, when affected people take these issues to the state legislature, they find a confusing labyrinth of dead-ends. Legislators are misled by the timber and chemical lobbyists who plant a forest of deceitful “facts.”
Over three decades ago, federal agencies banned aerial spray on public timber lands. Today, state agencies and elected leaders turn a blind eye to the fact that Oregon has the weakest laws of any Pacific West Coast state for regulating timber practices and aerial herbicide sprays.

Due to the inadequate response of our state’s legislature, it has now fallen to the people to take action to stop poisonous aerial herbicide sprays in our watersheds, on private residential property and over organic farms. We urge our members to read the Freedom from Aerial Herbicides Bill of Rights and join a mainstream movement to protect ourselves from poisons sprayed from the sky.

For all these reasons, Beyond Toxics supports a ban on aerial spray. We believe that a ban must happen at the state level, and soon. Chemical trespass and pollution affects Oregonians, often in devastating ways that change our lives forever. A county-wide ban sends a strong message that people in Lane County demand action.~ Lisa Arkin, Executive Director
Beyond Toxics