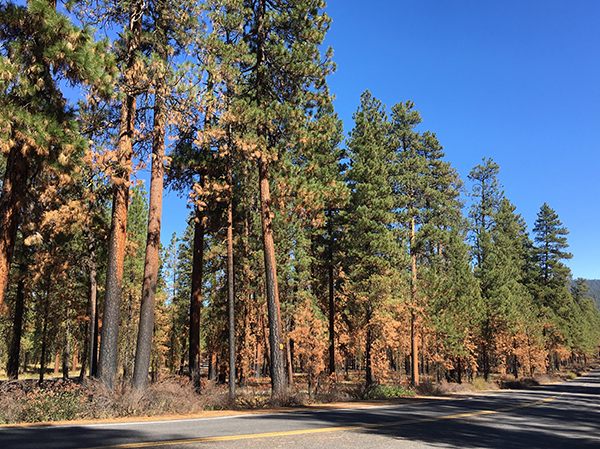 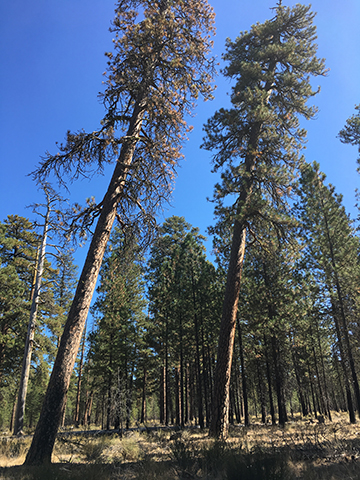 Oregon state and county agencies have breached the law and the majestic Ponderosa pines of Eastern Oregon are dying as a result. The already-parched and receding aquifers are at risk as well. In 2013 an innovative law requiring state agencies to study the consequences of pesticide use and use less toxic methods of killing weeds and pests successfully won bi-partisan passage in the Oregon legislature. Led by Beyond Toxics and sponsored by Rep. Alissa Keny Guyer, Oregon State Integrated Pest Management (HB 3364) offered hope for people and wildlife awash in a dizzying variety of chemical trespasses.

Beyond Toxics discovered that the Oregon Department of Transportation (ODOT) made a grievous error in seeking cheaper products instead of safe products! In so doing, they approved the use of the active ingredient Aminocyclopyrachlor. From the beginning of its introduction to the market the EPA identified this herbicide as highly toxic and sought strong restrictions. They ultimately backed off after the chemical industry objected. Poisoning incidents have since begun to stack up.

Oregon is now a victim of one of those poisoning incidents. In the fall of 2014, residents of Deschutes County and US Forest Service employees noticed that many Ponderosa pines located along Highway 20 were discolored and sickly. Sampling by the US Forest Service and Oregon Department of Agriculture (ODA) confirmed that over one thousand trees were suffering and dying from exposure to the herbicide Perspective, which contains Aminocyclopyrachlor (ACPC). This potent herbicide was sprayed along the Highway 20 roadside to kill cheat grass. More poisoned and dying pines were also discovered along Highway 97 near Sunriver Resort. 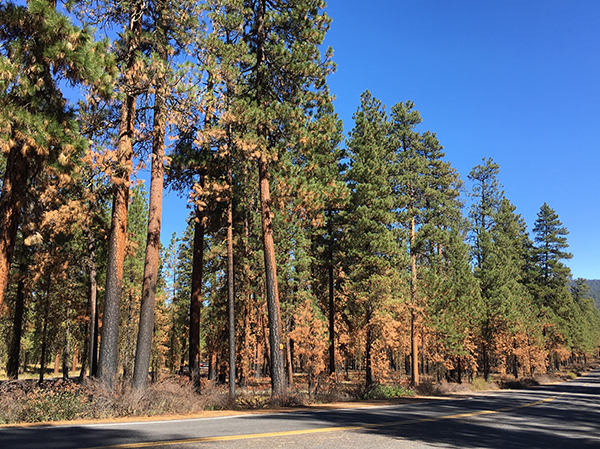 The beauty, water and recreational appeal of Central Oregon is threatened
If you’ve ever traveled west of the town of Sisters, Oregon you may have encountered a scenic stretch of highway near the Metolius River watershed and Black Butte Ranch lined with giant Ponderosa pines. The land here sits atop some of the state’s most porous soil. All of this--and the integrity of Eastern Oregon’s water table--is at risk from the continuing abuse of a highly toxic herbicide. The death of over 1400 majestic Ponderosa pines is an affront to Oregonians and all those who love the high desert beauty of Central Oregon. Why would ODOT approve the use of highly toxic and persistent pesticides and fail to monitor their impact in the environment? Now that we can see the invisible underground creep of herbicides made visible by acres of brown, crumpling trees, we must immediately determine if the groundwater of the Metolius watershed is at risk.

Beyond Toxics Leaps into Action
I went on a tour of the affected forest this past summer. The Forest Service revealed they’re discovering the area of dead and dying trees is continuing to expand out from the areas originally contaminated in 2014, 2015 and 2016. That is likely because the notorious hallmark of ACPC is its ability to move through soils, enter groundwater and poison tree root systems.

ODOT staff told me that they spray herbicides out 6 feet from the edge of the highway. Yet, during the tour I learned poisoned trees are showing up 10 times farther out than the original spray area! I raised the issue that ACPC is likely poisoning an entire groundwater area and demanded further environmental testing. I found myself wondering if the poison was spreading from tree to tree through the groundwater or is herbicide spreading through the mycelium that connects the trees’ root systems?

What’s Happening Now?
Representing your interests and protecting the health of people, trees and water, Beyond Toxics filed formal complaints with the Oregon Department of Agriculture (ODA) and demanded a thorough investigation. We let the agencies responsible know we’re prepared to take legal action to protect public lands and recoup the public’s loss of public property.
Following Beyond Toxics’ complaint, our questions and insistence that ODA re-open and conduct a thorough investigation, the agency instituted a temporary moratorium banning ACPC on all Oregon roadsides. Thanks to our diligence and intervention we achieved an administrative victory for common sense! Starting this December, Beyond Toxics is invited to attend a stakeholder group to determine if ACPC should be further and permanently restricted.

The problem is much more pervasive than merely this incident affecting thousands of Ponderosa pines. Oregon state and local government agencies are on a pesticide treadmill and refuse to consider changing their chemical-dependent ways.

The Oregon Department of Transportation’s false argument: We can’t afford to be careful!
I asked the ODOT crew if they could mow instead of spray herbicides along the  stretch of highway where we stood. Mowing seems appropriate because the land they are tasked with covering is completely flat and the sight lines are excellent. They responded that they only mow once in a 4-year cycle because the agency doesn’t set aside enough money for mowing. “It’s what we have to work with … trying to get the biggest bang for my buck,” was the response from the ODOT staffer.

What is the bottom line for residents of Deschutes County? Sadly, the US Forest Service recently determined that nearly 900 Ponderosa pines must be cut down soon. Many more trees will be cut in 2019. And no one knows the potential threat of future damage as the herbicide spreads through the area’s aquifer.

Oregonians! Demand a legislative hearing in 2019!
Beyond Toxics has asked state legislators to hold a hearing on how state agencies are--or are not--complying with HB 3364, the statutory mandate to be proactive to reduce pesticide use and protect people and the environment from pesticide exposure. So far, legislators are not scheduling a hearing. This lack of action denies the public their right to know how taxpayer and lottery dollars are being spent to buy and spray pesticides on public land. Write to your legislator and let them know you would appreciate their support for a legislative hearing on the (first-ever) 2018 State IPM Report.

Neither legislators, nor the public know how poorly state agencies are complying with the law as established in HB 3364. The killing of thousands of Ponderosa pines is Exhibit #1 in a system that may very well be ignoring the will of the people!

You may wish to ask your legislator this question: Has any state agency complied with ORS 634.657 (Section 7e)? The law states:

[Develop] Performance metric results for the implementation of integrated pest management, including but not limited to state agency and public university progress toward the goal of protecting the economy, ecosystems and water quality of this state and protecting the health and welfare of children, the elderly and other members of the public.

Thank you for taking the time to read this blog. We hope you will pitch in and get involved. Your input is crucial to the success of the work we do.
Lisa Arkin, Executive Director
Beyond Toxics