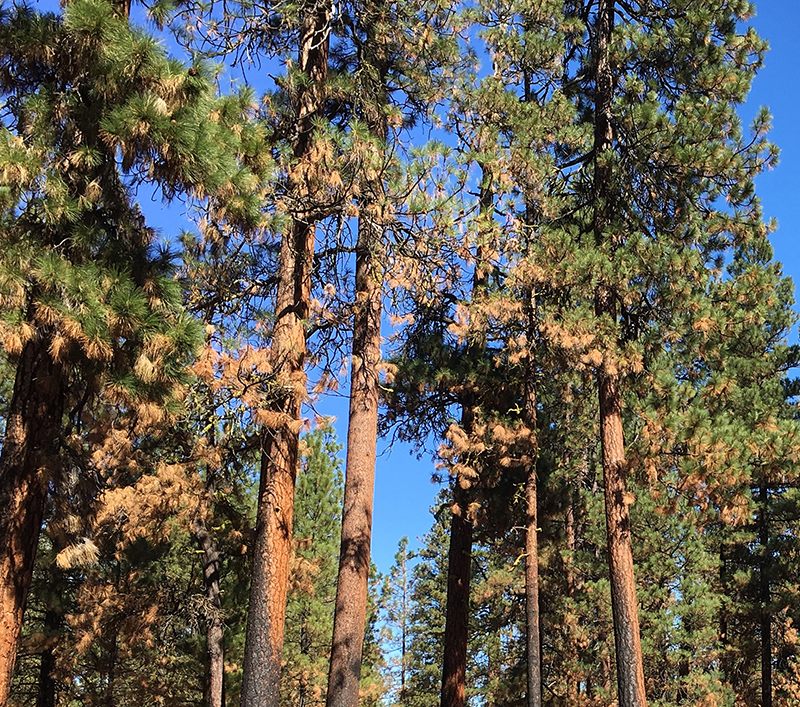 It may be easier to be concerned about wolves, salmon and eagles perishing than it is to feel remorse over dying Ponderosa pine trees. Yet, the presence of giant, old growth Ponderosas in central Oregon is as emblematic of a place as any furry, swimming or flying creature.

What would it say about our stewardship of Oregon’s natural resources if we allow the continued use of an herbicide that easily killed off nearly 1500 majestic Ponderosas? This poison, Aminocyclopyrachlor, dubbed ACP because of its tongue-twisting name, was banned from residential, business and golf course use by the U.S. EPA 5 years ago when it was manufactured by DuPont. Then Bayer Chemical bought the “rights” to make and market ACP. Bayer rebranded the poison to put it back into use.

As far back as 2015, when the US Forest Service realized that ACP was being used on highways that ran through public forests, the agency asked the Oregon Department of Transportation (ODOT) to stop using ACP. Forest Service scientists realized the high risk of killing trees could not justify ACP roadside sprays. Yet ODOT and county road departments ignored the warning and continued spraying toxic ACP along many of Oregon’s roadways. I’ve started to wonder … perhaps those ailing fir and pine trees I’ve noticed along various highways are not symptoms of a warming climate, but are struggling to survive from absorbing ACP? Will we ever know?

ACP is undoubtedly a potent poison. Road vegetation managers spray it along the sides of roads to kill unwanted weeds that may interfere with visibility or be considered a fire hazard. ACP is good at killing noxious weeds, and yes, noxious weeds are a problem in central Oregon.

But when do the ends justify the means?

Roadside weed managers say they need ACP because the weeds have become resistant to other herbicides such as glyphosate. Like going from guns to chemical weapons to nuclear weapons in warfare, are we going to repeat the same mistakes in our environment? Will we as a civil society accept ever-increasing devastation from dangerous products in a downward spiral of environmental destruction? Just because the old ones don’t do the trick anymore? What we need are safer alternatives and a paradigm shift toward protecting environmental and public health in roadside management!

Here are the frightening facts. ACP was sprayed on a 6 ft. swath along the very edge of Highway 20, yet giant Ponderosa pines are now dying, including trees as far as 75 ft. from the sprayed road. This pesticide moves easily in the environment; the pattern suggests that ACP gets into ground water and is taken up by the roots of thirsty trees. Root zones of pine and fir trees can stretch long distances in all directions from tree trunks. From its investigation into what killed the Ponderosa pine trees, the Oregon Department of Agriculture found that ACP was detectible in the pine needles high up in trees three years after the chemical was used. The trees themselves have become so poisonous they now must be removed from the forest floor where decomposition can continue to spread the chemical’s harm. Sawdust and bark chips from these trees are hazardous waste and can never be used for soil amendments.

ACP is currently being used in seven counties across our state. I’m proud that Lane County’s Public Works Department does not allow the use of ACP because it developed a strong integrated vegetation management program based on science and environmental health benchmarks.

The Oregon Department of Agriculture is proposing to severely restrict its use by adopting new regulations. The Agency’s staff is doing their due diligence and their recommendations are commendable. Importantly, ACP will not be allowed near “desirable” tree roots, in wetlands and other surface water sites, wildlife management and habitat areas. But according to the ODA’s own calculations, the new rule will allow as many as 242 spray areas of 9 sq. ft. per acre every year!

It is time to stop, not restrict. ACP is a danger to entire ecosystems of living old growth trees. It is unpredictable in the environment and poses a threat to ground water everywhere it is sprayed.

Does Oregon want to apologize to future generations for the loss of Oregon’s iconic Ponderosa forests? I’d rather we thought ahead and acted decisively in their interest – today!