We won! And Bayer Chemical lost! 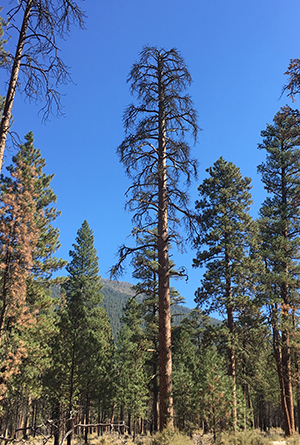 According to the USFS report, "Trees of all sizes are dead and dying along the highway." | Photo by Lisa Arkin

On May 9th, Oregon became the first state in the country to restrict the use of Aminocyclopyrachlor (ACP), an herbicide marketed to kill weeds that ends up killing trees. In Oregon, ACP killed 2,000 majestic old-growth trees. This deadly chemical reportedly travels underground along tree root systems, passing the poison from tree to tree, and continuing to kill trees long after and far away from the original pesticide application.

Beyond Toxics led the grassroots campaign that resulted in this landmark victory to protect trees and wildlife areas from a potent herbicide. We challenged the blatant collusion between powerful chemical companies and our weak federal environmental protection agency. In the end, our perseverance paid off and we won!

Last spring, Beyond Toxics filed a public records request with the Oregon Department of Agriculture (ODA) about a devastating tree die-off in the national forest along scenic Hwy 20 in Central Oregon. We learned that ODA and the US Forest Service had known about the death of thousands of old growth Ponderosa pines for years and suspected the trees had died of an exposure to the notorious herbicide ACP. As part of the Oregon Department of Transportation’s roadside maintenance activities, ACP was sprayed on the state highway shoulders within the national forest.

Our public records request revealed that state agencies neglected to do a proper investigation or test for the chemical in the affected trees, soils and ground water. Beyond Toxics immediately called for a thorough investigation and environmental testing for the presence of ACP in the dying Ponderosa pines. ODA agreed and the new investigation concluded that the herbicide, sprayed along the roadside, had poisoned nearly 2,000 old-growth Ponderosa pines. The herbicide was detected in needles far up the dying trees and also caused giant trees to die 70 ft. from where the herbicide was sprayed. Pesticide drift was ruled out.

Consider: an herbicide sprayed along a narrow 6 ft. wide gravel swath killed giant trees that had been part of a fragile ecosystem long before white settlers arrived – and killed them 70 ft. from the road. Oregon regulators looked into the history of ACP and discovered that its manufacturer, DuPont Chemical, knew it could kill trees, even from a tiny exposure. After finding out that ACP can kill trees by traveling in the ground water or among tree root pathways (or both), Beyond Toxics demanded regulatory action to end the use of ACP in Oregon. We worked to alert Oregonians and our allies around the country to the dangers of ACP and taught supporters how to submit public comment during ODA’s rulemaking period. After thousands of comments were received by ODA, an 11th hour intervention by Bayer Chemical delayed the Agency’s decision. But the substantial evidence of ACP’s extreme toxicity and the public outcry kept ODA on course!

Oregon’s new law prohibits the application of the herbicide on rights of way, in and around Sage Grouse habitat, natural and restoration areas and anywhere near a water source. In response to the concerns of roadside vegetation managers in Eastern Oregon, the rule allows ACP in areas that “do not exceed more than 5% of an acre,” but only once a year, in order to control state or county-listed noxious weeds.

In 2014, DuPont chemical company settled a nearly $2 million lawsuit with the U.S. Environmental Protection Agency (EPA) after the herbicide (under the brand name Imprelis) was found to kill trees at golf courses, homeowners associations, businesses, and private residences. Despite this danger, chemical corporations convinced the EPA to allow sales of ACP to continue. The EPA looked the other way when DuPont sold Imprelis to Bayer Chemical who then changed the name and the registration, but kept manufacturing the active ingredient ACP.

With a wink and a nod, chemical corporations and the EPA play a “shuffle game” with pesticides such as ACP. The game helps avoid regulatory action by switching names and ownership and keeping the dangers hidden from public scrutiny. Oregon addressed this switcheroo by restricting the active ingredient, ACP, rather than just the product name.
This victory merits a moment of celebration! Because of the new law we won in Oregon, other states may step forward to protect trees and ecosystems from poisoning. May trees everywhere rejoice!