A right to clean air 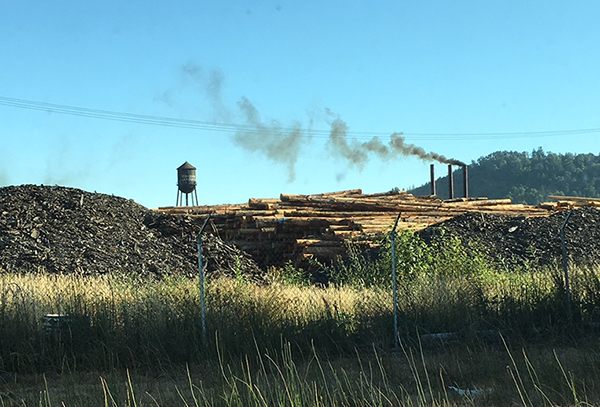 Do you wonder how polluted the air you are breathing is? The fact is, the quality of our local air is a critical factor in our health. Sadly, air pollutants commonly found in Eugene-Springfield’s air are known to cause serious harm to public health.

Example of the air pollution sources common for residents of West Eugene. Unedited video footage of the Arauco North factory In West Eugene, 2019.

In the next few months, the air pollution permits for the Seneca Sawmill and the Seneca biomass plant (a.k.a., Seneca Sustainable Energy) will be considered for renewal. Beyond Toxics asked the Lane Regional Air Protection Agency (LRAPA) to schedule public hearings to ensure that input from those in the community most impacted by air pollution be heard and considered. Those public hearings should be announced soon.

Holding a public hearing is absolutely necessary to ensure democratic and representational input from the public. Beyond Toxics has a long history of holding LRAPA responsible for greater public accountability and transparency, including Beyond Toxics’ successful 2019 Civil Rights complaint to the US EPA. Our federal Civil Rights complaint against LRAPA was a milestone in demanding agency compliance with fair, equitable and democratic practices - we’re proud we succeeded in getting the EPA’s support (even under the current Trump administration!). Our case was one of two Civil Rights Complaint cases in the entire Pacific Northwest which were accepted as valid cases and successfully concluded!

Help our entire community keep LRAPA accountable to clean air and public health! If you value the right to clean air, please join together with Beyond Toxics to make sure that LRAPA follows the full intent of the new state law, Cleaner Air Oregon.

Cleaner Air Oregon is a set of laws created to prioritize and protect the health and well-being of all Oregonians from air toxics emissions from industrial and commercial sources. The State of Oregon recently adopted these new air quality protection laws because of the strong association between air quality and public health. I served nearly two years on the CAO Rules Advisory Committee and can assure you that Beyond Toxics fought very hard to successfully win new laws that will reduce cancers and other serious health ailments in Oregon.

New information repeatedly confirms the causal relationship between toxic exposures and the epidemic of chronic diseases in this country. The rate of cancer cases is now above 40% and climbing about 3.5 to 4% per year. According to the National Cancer Institute, estimated 2017 national expenditures for cancer care in the US were $147.3 billion. In future years, costs are likely to increase as the population ages and cancer prevalence increases. Chronic illnesses, including neurological problems, autoimmune and respiratory diseases are also associated with breathing polluted air. Until the social costs of poor public health are included in any air toxics risk assessment, we have not addressed the problem!

Upon review of Lane County’s air quality data, as gathered by the Lane Regional Air Protection Agency (LRAPA), a government organization that tracks the quality of our local air, it is clear that there is a problem that needs attention. Rosboro Lumber was recently fined $9,000 for air pollution violations as a result of a complaint filed by Beyond Toxics.

Since November 1, Eugene has experienced only 14 days of good air quality. That means our air was healthy to breathe less than one third of the days in November and December. During four additional days, or nearly 10% of the time, the air was rated as “Unhealthy” for groups identified as especially sensitive to air pollution. According to LRAPA data, the rest of the days our air quality was “Moderate” about 60% of the time. Moderate air quality is acceptable; however, pollutants there may still be a moderate health concern for some people.

Many activities contribute to polluted air. For example, people start up their car in the morning long before they plan to actually start driving it. The exhaust of a stationary car with its motor running fills the air with benzene, carbon monoxide, airborne particulate matter and other toxic chemicals. Stagnant weather patterns also contribute to air pollution issues by trapping pollutants which can then reach unhealthy levels.

Our industrial economy uses our common air shed to discharge pollution, but these companies are not held accountable for their contribution to the public harm caused by cancer, asthma and other diseases linked to air toxics. As I visited various areas of Eugene on some of our stagnant air days, I saw industrial smoke stacks spewing out plumes of dirty emissions. Most of us smell the emissions, but we may ignore it or accept it as “the way things are in Eugene.”

Do you recognize the signature smell of creosote and naphthalene from JH Baxter? How about that pungent smell of methanol mixed with the sooty taste of particle pollution that sticks to your tongue from the string of wood product industries just beyond Beltline Highway? Beyond Toxics has recently completed over 300 individual surveys of how West Eugene residents experience the quality of the air they breathe and their observations about health patterns in their families. Our data suggests the vast majority of the people living in areas of West Eugene smell polluted air and feel its impacts on a regular basis. Beyond Toxics recently conducted a Environmental Justice Bus Tour of West Eugene factories with a group of community members.

Join us in our effort to gather our collective power to demand that regulations are fully enforced to protect the quality of our air and our health! We’re planning a number of community meetings and town halls.

We’ll be reporting on our findings, as well as helping residents learn how to give effective testimony during the upcoming hearings on two of Lane County’s largest polluters, Seneca Sawmill and Seneca Sustainable Energy (biomass incineration) plant. We’ll be discussing how to win an Oregon Green New Deal.

Our first meeting is the West Eugene Clean Air Community Meeting on Saturday, January 25 at Peterson Barn at 5:00 PM for dinner and a community discussion about YOUR RIGHT TO CLEAN AIR. I hope to personally see you there!