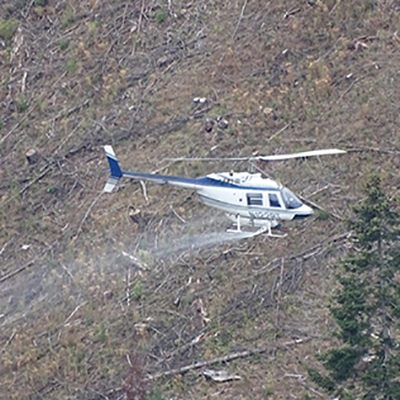 When Allie McDermott and her partner heard the helicopter blades whirring early on a Sunday morning in March, they were stunned. As they ran up the road to see for themselves they thought, ‘There is no way an aerial spray could be happening on a Sunday!’

After all, they knew there had been an agreement between the timber owner, the pesticide applicator and the Oregon Department of Forestry to have a State Forester come out the next week to observe the aerial spray. The presence of a State Forester serves to help ensure all laws are followed. It so happened that the pesticide applicator in this case was Steve Owens, owner of Pacific Air Research, the same helicopter pilot who had lost his license when he sprayed the community of Cedar Valley near Gold Beach in 2013. 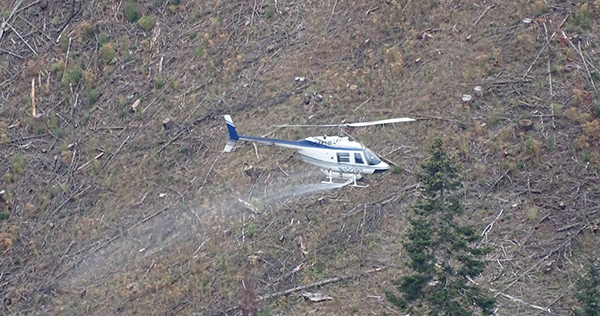 These are both dangerous chemicals. The US EPA states that Atrazine and Velpar (active ingredient Hexazinone) can easily contaminate ground and drinking water. Both are highly toxic to aquatic life. Velpar can cause irreversible eye damage. Atrazine is a known human hormone disruptor. Absolutely no one would want these poisons sprayed near their homes and farms.

Unfortunately, these timber neighbors were just three months shy of pesticide protections provided by Senate Bill 1602, which passed nearly unanimously in the Oregon Legislature on June 26th. This landmark law will soon address some of the issues faced by McDermott, and hundreds of the other rural Oregonians who have reached out to Beyond Toxics over the past 18 years.

SB 1602 mandates that residents living near planned spray operations can request and will receive an email alert 24 hours before an aerial spray. No more helicopters sneaking in to spray at sunrise on a Sunday morning, unscheduled and unannounced! With this real-time notification, nearby residents can leave the area temporarily or prepare their families, take precautions to protect their pets and livestock, and collect water and soil samples before and after a spray operation if they wish. Pesticide applicators and timber land owners will receive hefty fines if they disobey the law.

McDermott’s partner took water samples on their property and sent them for testing to certified lab. The sampling results came back showing extremely high levels of Atrazine. An investigation by the Oregon Department of Agriculture also found Atrazine residues within protected boundaries along a stream on the timber owner’s property.

Had SB 1602 already been in place, McDermott and her other neighbors would have had better protections from pesticide drift. The bill mandates larger protective buffer zones for homes, schools and drinking water intakes, more than 5 times what was previously required in statute. The new law also increases no-spray buffer zones for all streams. With SB 1602, helicopter pilots like Steve Owens are required to stay 300 ft. away from the domestic water intakes and 75 ft. away from the streams.

Another strong point of SB 1602, rural residents are now legally entitled to their ‘right-to-know’ before a helicopter arrives on the scene. With the passage of SB 1602, Oregon has finally adopted human health and environmental laws more closely aligned with pesticide protections required in other western states.

McDermott is also an organic blueberry farmer. We believe she has every right to ensure that no herbicide spray drift reaches an organic food crop. Her ability to run a certified organic business should never be jeopardized by industrial timber business practices. Beyond Toxics fights to protect organic farmers like Allie McDermott who are working hard to provide healthy, non-toxic food for their communities.

SB 1602 is a compilation of legislative initiatives Beyond Toxics has introduced over the past five years. Based on a decade of grassroots organizing across Oregon, we brought forward a wide variety of pressing issues for legislative review and supported many dozens of rural residents in their efforts to testify at the State Capitol to demand protections from aerial pesticide spray. Senators Michael Dembrow, Floyd Prozanski and Ginny Burdick as well as Representatives Paul Holvey, Alissa Keny Guyer and Marty Wilde have been strong champions for forestry and pesticide policy modernization. Our early wins to reform the Oregon Forest Practices Act set the stage for the passage of SB 1602.

Beyond Toxics has chronicled the many harrowing aerial spray experiences suffered by rural neighbors year after year. These stories belie the deceitful narrative offered by industrial timber giants trying to claim they’re just doing the best they can for Oregonians.

So much is gained by the passage of SB 1602. So much more needs to be done to win forest policies that no longer harm people, wildlife, rivers and our climate. We promise to continue to be warriors for forest health and pesticide policy victories!

After their experience, McDermott and her family are eager to see more legal protections from aerial herbicide drift. Reflecting on the new legislation in one of our recent conversations, she felt a sense of relief. “We need laws like SB 1602 because corporate timber companies just want to increase their profits by decreasing their accountability.”