Troubled Waters: Pesticide runoff into the Siuslaw River threatens salmon and the people who rely on them 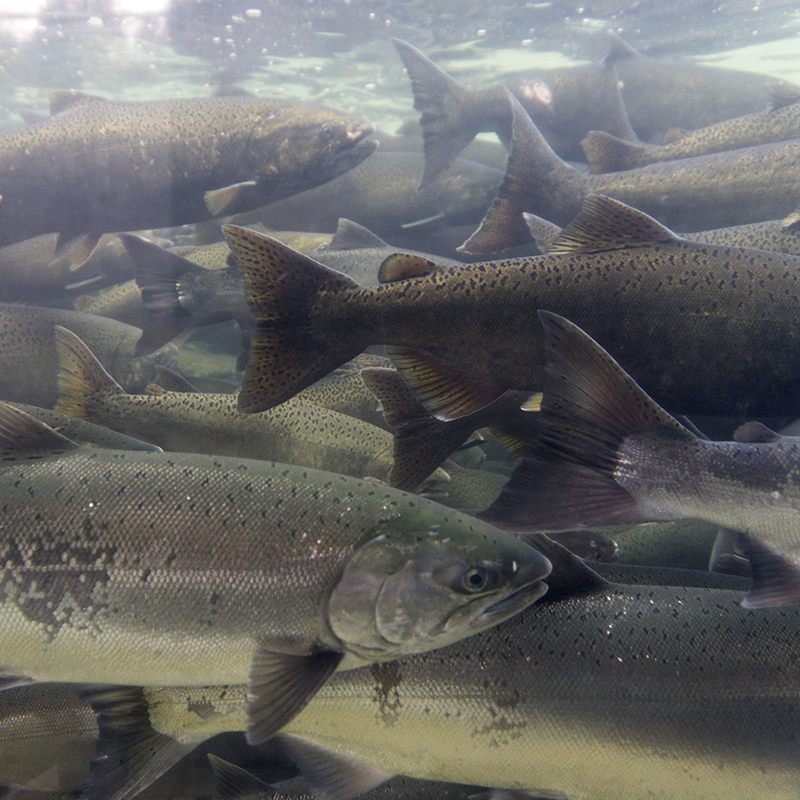 An underwater view of a group of wild salmon 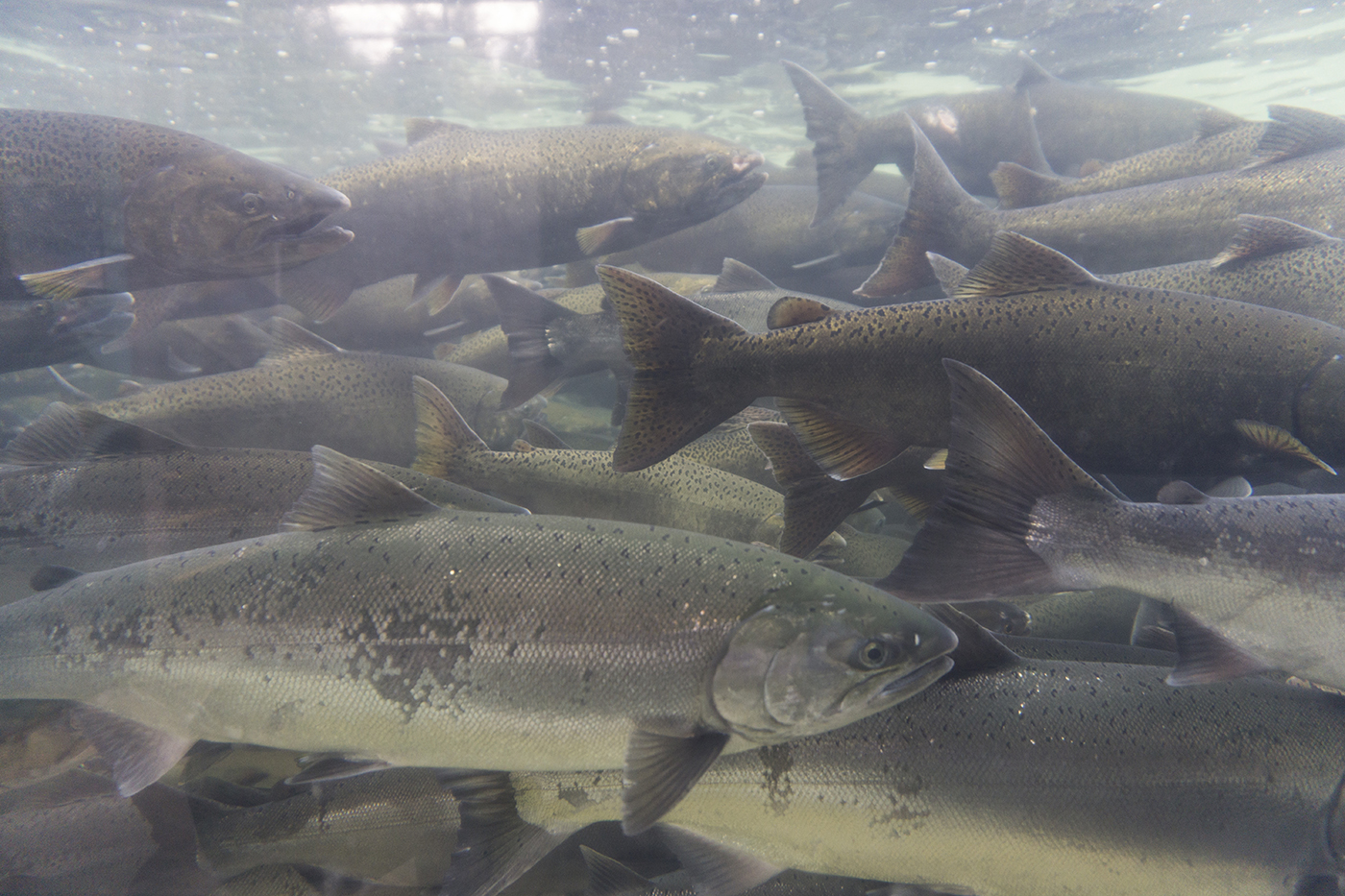 An underwater view of a group of wild salmon.

Throughout history, the Siuslaw River was a vital watershed with salmon populations “second only to the Columbia.” Colonization of Oregon changed this––unsustainable fishing was practiced, natural buffers for streams were removed for logging, and the Siuslaw was polluted. Historically, there was an average of 260,000 coho salmon returning to the Siuslaw in one year, but in 1997, that number was a dismal 500.

Salmon are a significant part of the culture and society in the Pacific Northwest. Indigenous tribes relied on salmon runs for millennia before settlers arrived in the 1880s. The Siuslaw People managed this watershed for hundreds of generations, ensuring salmon would come back. Every year the Confederated Tribes of Coos, Lower Umpqua, and Siuslaw Indians have an Annual Salmon Ceremony not only to celebrate the return of salmon, but to “honor and thank the Salmon People.” According to a study in 2019, “the most frequent pillar in the environmental justice movement of the Pacific Northwest was ‘salmon’” for surveyed Indigenous peoples. As the salmon disappear due to climate change, dams, and toxins, the  tribal cultures, communities, and economies are being threatened like never before. Salmon remain integral to the food security, cultural practices, health, and economy of Indigenous peoples, so the ongoing threat of pesticide runoff is a major issue for salmon and these communities.

Restoration techniques have helped improve important salmon habitat like estuaries and tributaries, but more work still needs to be done. Salmon are vital to smaller fishing towns in Oregon that rely on the seafood industry to bring in jobs, revenue, and tourists. Many coastal towns are “ghost towns” in the off season, and salmon seasons generally bring fishermen from a vast array of locations that stimulate local economies and small businesses. 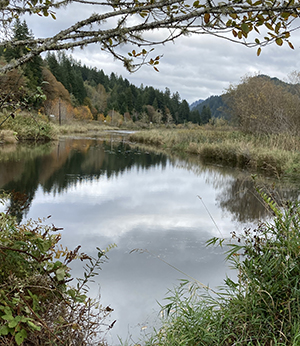 Juvenile salmon spawning estuary that is part of the lower Siuslaw River. Photo by Lisa Arkin.

Runoff found in Siuslaw River
In 2015, the Oregon Department of Environmental Quality (DEQ) published its Statewide Water Quality Toxics Assessment Report and supplementary Basin Summary Reports. These reports found that samples in the Siuslaw River, specifically at Siuslaw Falls, “contained the greatest number of unique chemicals.” Of those chemicals, DEQ found persistent levels of legacy pesticides (chemicals such as DDT that were once used but now banned in the US due to health concerns), flame retardants (PBDEs), and some current use pesticides, including atrazine and trifluralin. They found levels of flame retardants and legacy pesticides to be of concern in the upper Siuslaw River watershed.

How those chemicals enter the water stream
All of the chemicals found in the Siuslaw River enter streams through runoff, and many of them are present in the soil of forests already. Atrazine is sprayed on clear-cut areas by the timber industry, and aerial herbicide sprays frequently occur directly over headwaters of protected salmon streams. One third of the Siuslaw National Forest was clear-cut between the 1960s and 1980s, which could explain the concerning amount of legacy pesticides. While forest buffers surrounding rivers are one of the best ways to prevent toxic runoff into our streams, Oregon’s stream buffer requirements are weak.

Riparian forests filter sediments and pesticides out of the soil before they reach streams. In Washington, there are 50 foot no-cut buffers required for logging around fish streams and non-fish streams (which are often upstream from fish streams so runoff could still reach the fish). This prevents harvest on public and private land and protects salmon. However, in Oregon, only 20 foot buffers are required around fish bearing streams and no buffers around non-fish streams on private lands. This has led some companies to log right to the edge of a stream that drains directly into salmon habitat but doesn’t have any fish in that section. In that case, there would be no remaining natural filtration system to filter out toxins from the soil and prevent runoff into streams when it rains.

Impact of Pesticides on Salmon
The Siuslaw River has populations of Oregon Coast coho and fall Chinook salmon. Oregon Coast coho are a federally threatened species of salmon that have key spawning habitat in this basin. While Chinook and coho salmon have differences in their life histories, they have one important similarity that makes them more at risk from chemical runoff in streams: both spend one to three years in freshwater before migrating to the ocean. While some other salmon species such as pink salmon migrate downstream almost immediately after emergence from the gravel, Chinook and coho salmon spend multiple years in their birth streams. This means they are exposed to toxins in the rivers for much longer than other species of salmon that migrate immediately, such as the legacy pesticides, flame retardants (PBDEs), and current use pesticides detected in the Siuslaw.

For salmonids, studies have shown that long exposure to legacy pesticides can “decrease the antigen response...and viability of immune cells.” Flame retardants (PBDEs) are potential endocrine disruptors that suppress immune function in salmonids. Current use pesticides like atrazine and trifluralin reduce the olfactory system of juvenile salmon, which they use to sense predators and eventually return to their birth stream.  Atrazine also causes issues when salmon migrate downstream because it disrupts an enzyme and makes them less able to regulate to more saline environments in estuaries and the ocean. Water quality metrics are often based on lethality, so even if toxin concentration is below the required amounts, it can still cause issues with the sensory system and lead to higher mortality.

All of these chemicals lower the lifespan of salmon and, even though most are below risk levels, mixtures of chemicals are not analyzed or tested under the Federal Insecticide, Fungicide, and Rodenticide Act (FIFRA). One study found that “salmon exposed to [chemical] mixtures showed either concentration-additive or synergistic neurotoxicity as well as unpredicted mortality.” Basically, these chemicals combine to create a soup-like mixture of toxins that add onto each other, weaken the immune systems of salmon, disrupt their endocrine system, and increase population mortality rates.

Conclusion
My research shows that these salmon are likely being affected by contaminants much more than DEQ has claimed. This research is troubling because of the cultural and economic importance of salmon in the region. Sources of these pesticides need to be reduced, and larger stream buffers must be instituted in order to protect these salmon from pesticide filled runoff. The loss of salmon means the loss of jobs and the loss of an integral resource for small communities and Tribal Nations. The Indigenous peoples and others who rely on these populations of salmon in the Siuslaw Basin are entitled to the continuation of these runs.

MORE about Jenna Travers:
Jenna is a second-year marine biology major at the University of Oregon and will be serving as a Summer 2021 intern with Beyond Toxics. Jenna grew up in several fishing towns in the Pacific Northwest and Alaska. "Salmon are near to my heart," she says. The focus of her current research is salmon and their cultural and economic significance in the Pacific Northwest and she is passionate about leaving behind a better world than the one she inherited. Her research for Beyond Toxics will focus on the impact pesticide runoff has on salmon in the Siuslaw River and related environmental justice concerns.