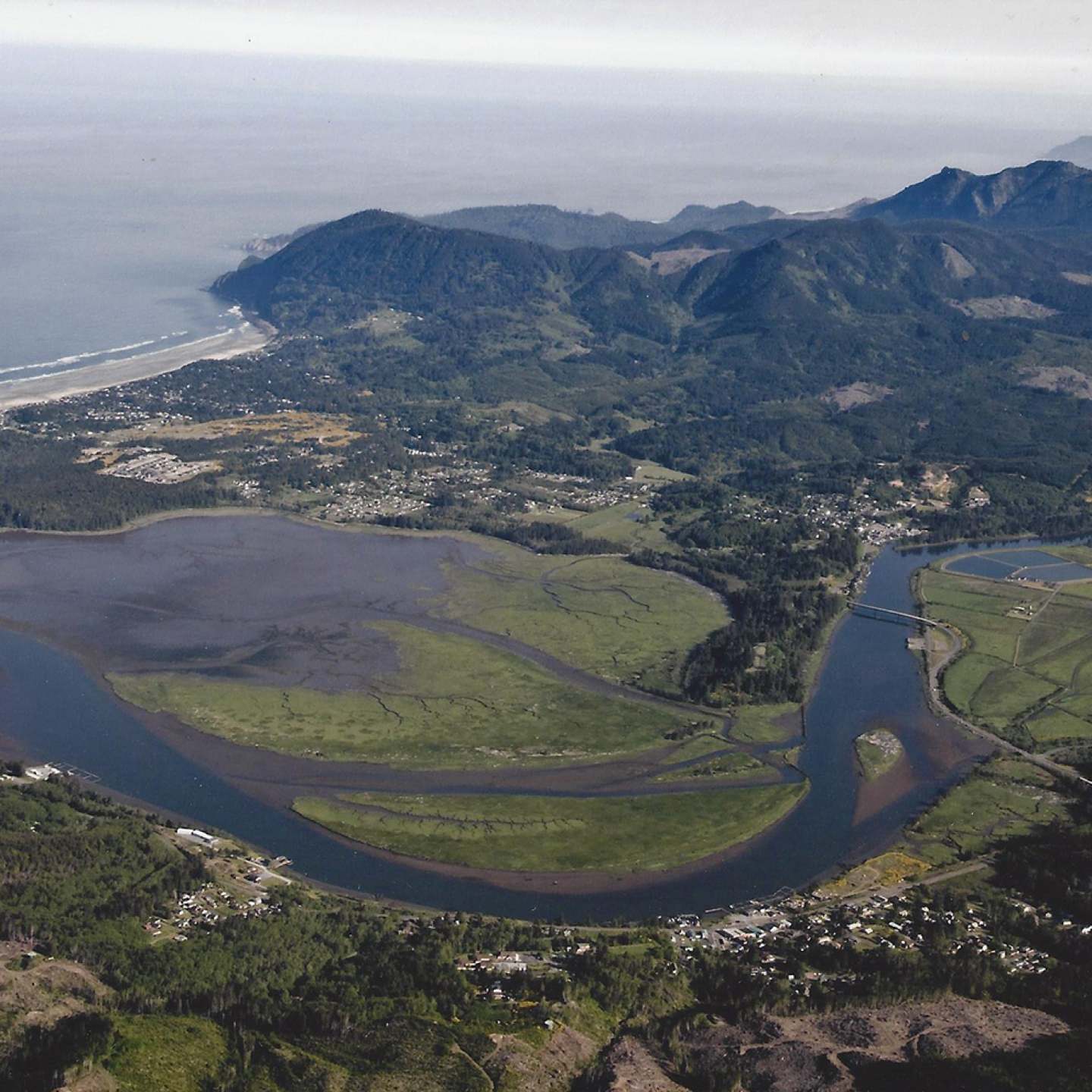 Photo of Nehalem Bay, Oregon (above) by Don Best

Beyond Toxics continues to stand up for Oregon’s forests, watersheds, and communities. Keep reading to see how we’re moving the mark on pesticide use in Oregon’s state forest lands.

At the September 8, 2021, Board of Forestry meeting, we presented findings to the Board summarizing herbicide applications on Oregon State Forests from January 1, 2020, to August 30, 2021. Bottom line: in that brief 20-month period, 326 tank mixes were applied to state-managed forest lands, over a third of which were aerial sprays. Check out our first report here. 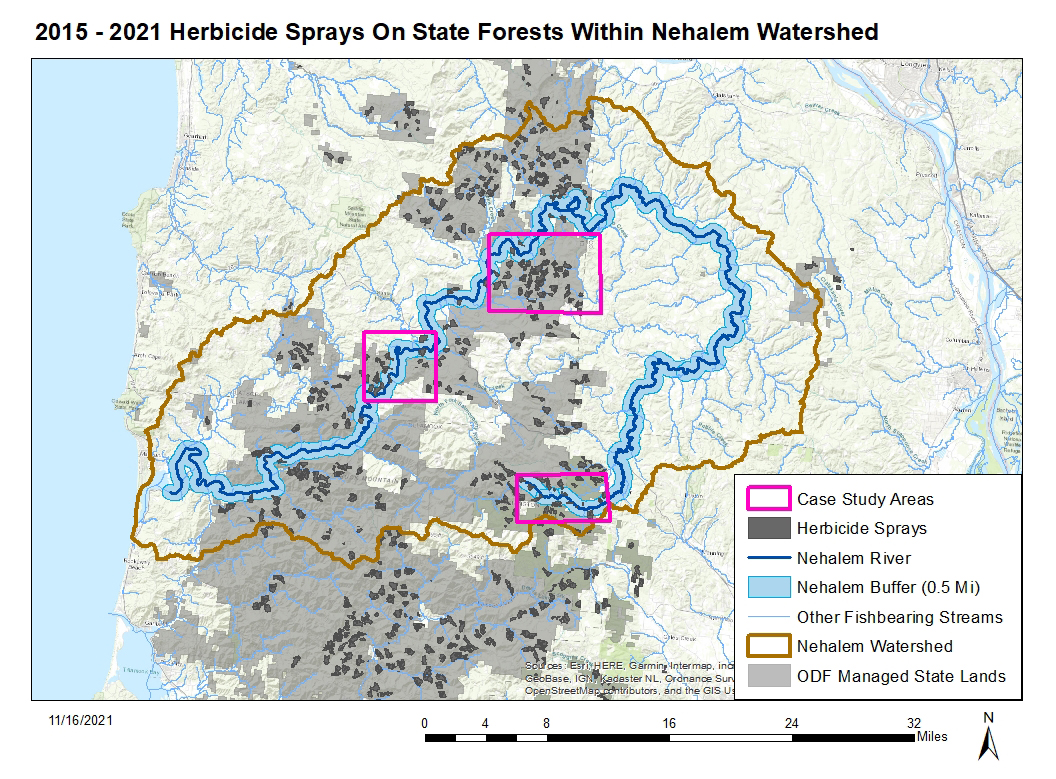 The maps that follow take a deeper look at a few “Case Study Areas” outlined in pink. Our goal was to use this case study focused on the headwaters and other stretches of the Nehalem River to help the the Oregon Department of Forestry and the public visualize where pesticide sprays take place, note their close proximity to important fish-bearing streams, and consider related impacts on Oregon’s iconic salmon and trout populations.

This map shows herbicide applications at the headwaters of the Nehalem River. There were 52 acres sprayed within a 500 foot radius of the river, many of which were adjacent to perennial streams that form the Nehalem River headwaters. 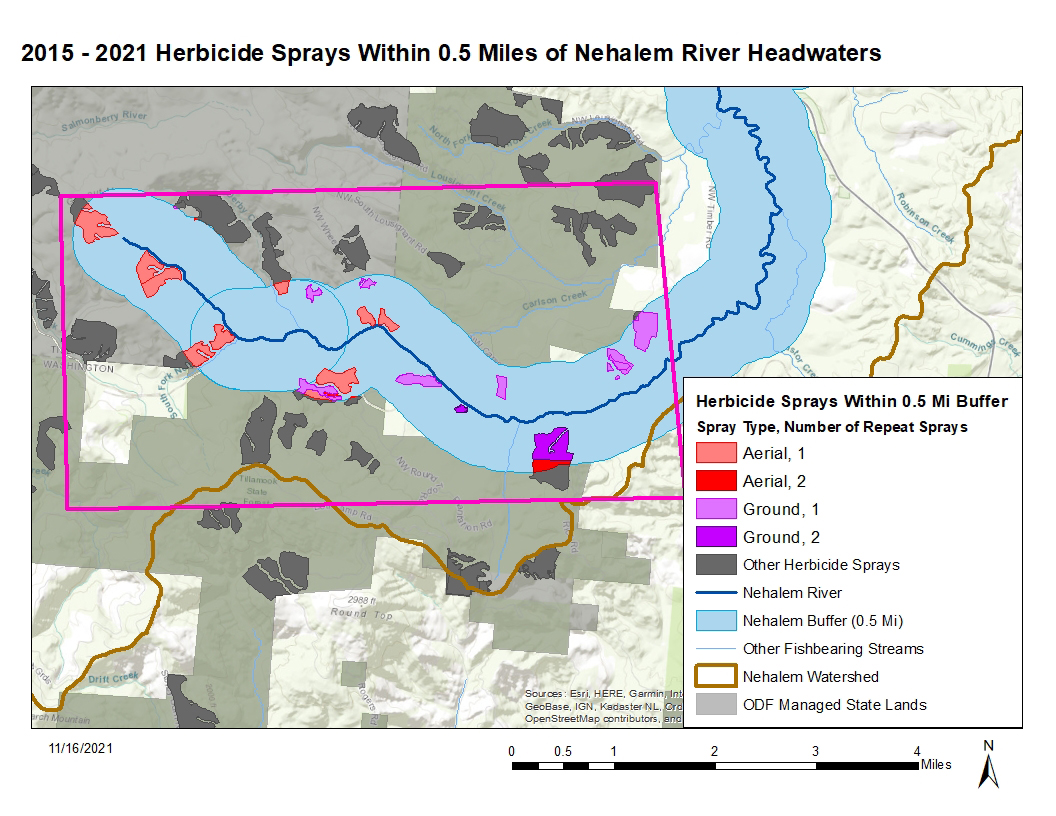 This next map shows part of the lower third of the Nehalem River, which includes the Astoria District. There were 95 acres sprayed within a 500 foot radius of the river. More than two-thirds of sprays closeby were aerial sprays. 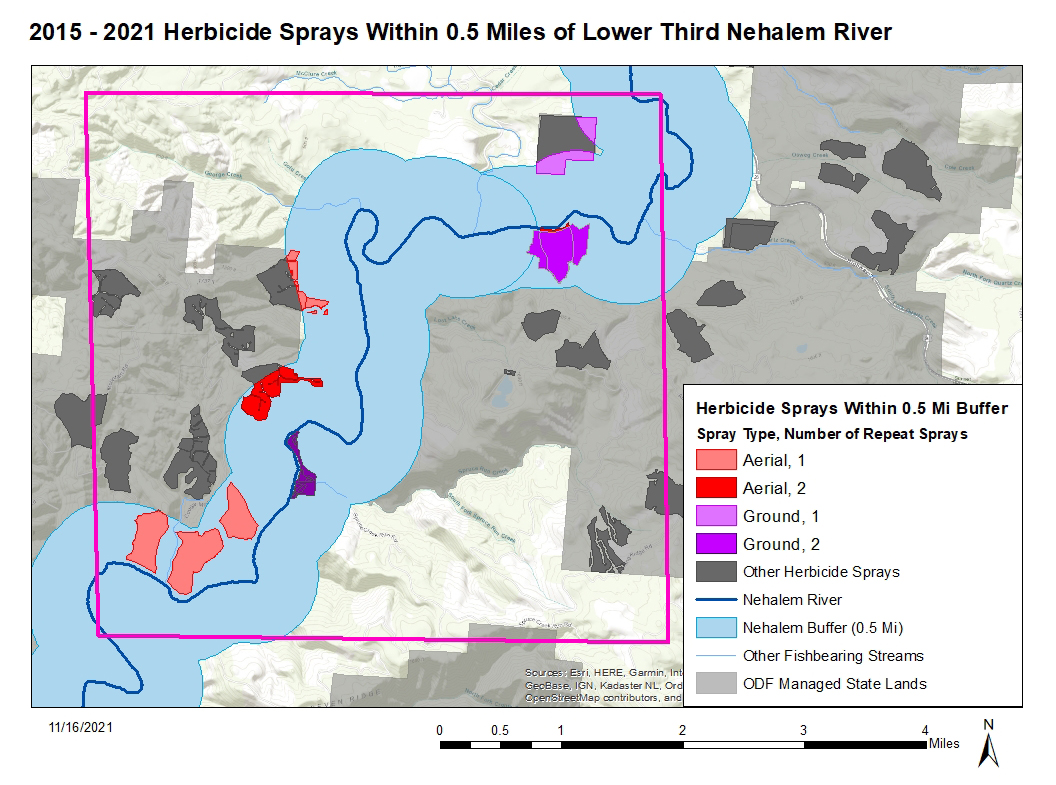 ODF requires a no-spray buffer on perennial streams, so the map for Case Study 3 accounts for a 100 foot no-spray buffer. It must be noted that, despite no-spray buffers, chemicals applied may unintentionally enter waterways--especially in the case of aerial applications. A number of factors including weather and site conditions can cause aerially-applied pesticides to drift into unintended areas, including nearby streams. As shown, the overwhelming majority of sprays touching this 100 foot buffer were aerial sprays. 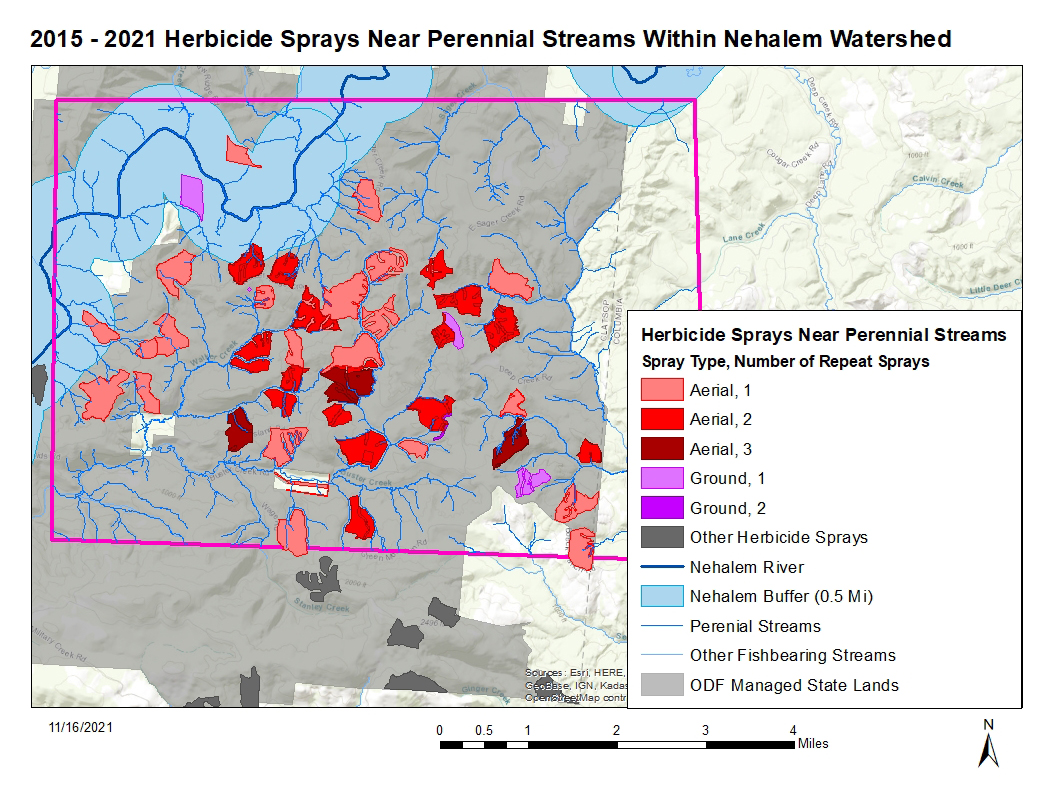 Pesticides and Fish
As shown above, herbicide sprays of chemical tank mixes are occurring throughout the length of the Nehalem River. The Department of Forestry's spray activity starts in the highest reaches of the perennial streams that form the headwaters of the watershed, which may result in a pattern of cumulative residues in the waters and soils of critical aquatic wildlife habitat. Once in the streams, pesticides can affect fish including salmon in many different ways, including by hindering the olfactory system of juvenile salmon, reducing the ability of juvenile salmon to adapt to saline environments, or disrupting swimming and predator avoidance. And in addition to the known effects of single chemicals, tank mixes of pesticides that are used often have not been tested in their combined state so their true toxicity on fish and aquatic organisms remains unknown.

The Nehalem River is the largest “wild fish only” river on the Oregon Coast and home to several runs of salmon, including one of the healthiest runs of Oregon Coast coho. Oregon Coast coho are a federally threatened species of salmon that have key spawning habitat in this basin. Based on the data we have compiled using the FERNS system, the large majority of the Department’s pesticide sprays in the area take place in the summer, so steelhead juveniles will be hit hard because that is when they emerge. Summer Chinook spawn right at the end of the peak spray season, so their egg development may be affected as well. The biggest effects will be on Oregon Coast coho, cutthroat trout, and steelhead, all of which spend one to two years in the Nehalem as juveniles and will thus be exposed to these toxins for longer than other species that migrate downstream immediately, such as chum salmon.

Pesticides and Climate Change
Finally, we cannot ignore the connection between pesticide use and climate change.

The Pacific Northwest has warmed by about 3 degrees F (or 1.7 degrees C) in the past half-century. Higher temperatures create imbalances in natural systems, causing more outbreaks and damage from pests and invasive weeds. This leads to increased reliance on pesticide use as there are more pests to manage. However, pesticides contribute to the climate crisis throughout their manufacture, transport and application.

Further, as pollinator populations are declining due to climate change, pesticide use causes additional stress. Recent research indicates high bee abundance and diversity in PNW forests. However, pesticide use can degrade pollinator habitat, particularly for ground nesting native bees. Exposure to heavily-used glyphosate can harm the development of a pollinator’s gut microbiome, lowering lifespans and decreasing their ability to withstand pathogens.

Why Does Our Data Matter?
It is crucial that ODF manage state forest lands to support resilient, climate-adapted forests that can withstand disturbances and changing conditions. Board Chair Kelly even called chemical spray “an issue of social license” and we agree; following years of toxic pesticide release that has threatened drinking water and important fish and wildlife habitat, the social license for aerial spray has long since expired. Thus, we will keep asking that the Board place a moratorium on aerial herbicide sprays and initiate an evaluation of the full range of impacts of herbicide sprays--particularly aerial herbicide applications--on state-managed forest lands on drinking water quality, greenhouse gas emissions, essential fish habitat, and community health and wellbeing. Onward!

Read our testimony to the Board of Forestry for more details and sources (PDF).

Learn more about all our efforts to advance Resilient Forestry