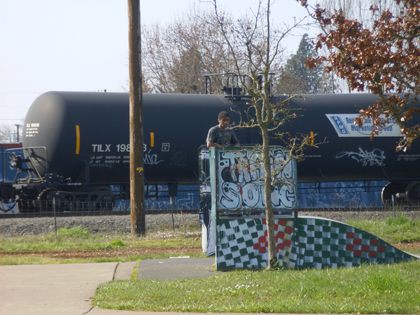 For children who live near the train yards, coal trains would be an added health risk burden 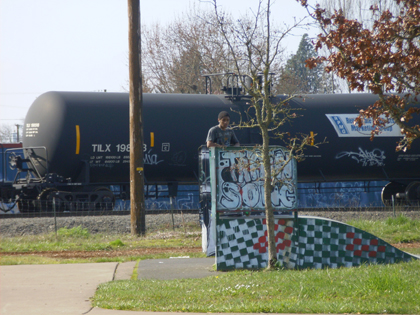 For children who live near the train yards, coal trains would be an added health risk burden

I want to be clear: I am not against trains (I often travel by passenger train)! I am, however, critical about using our rail system to haul coal to coastal ports and then load the coal and ship it off to Asian destinations. And justifiably so! Besides the significant safety issues posed by rail shipment of massive amounts of coal, we should consider the certainty of grave health problems we will have to address.

It is already true that health problems associated with polluted air occur in our community. Beyond Toxics has engaged with community health issues in the River Road, Trainsong and Bethel neighborhoods for many years. Recently we completed a community health survey in West Eugene. A striking pattern emerged. We found that 30% of the nearly 350 households we interviewed believe that at least one family member suffers from asthma. A 2006 study by State of Oregon did find a higher than expected number of lung cancers in this area. But more research needs to be done.

What do we know about the relationship between health hazards and the transportation of coal?

By the numbers
Let’s begin with words straight from a Burlington-Northern Santa Fe Rail Road research document they posted on their website. The document is called Coal Dust-Frequently Asked Questions and it addressed the question, How extensive is the coal dust problem?

“Since 2005, BNSF has been at the forefront of extensive research regarding the impacts of coal dust escaping from loaded coal cars … From these studies, BNSF has determined that … The amount of coal dust that escapes from Powder River Basin coal trains is surprisingly large. …BNSF has done studies indicating that from 500 lbs to a ton of coal can escape from a single loaded coal car. Other reports have indicated that as much as 3% of the coal loaded into a coal car can be lost in transit. In many areas, a thick layer of black coal dust can be observed along the railroad right of way and in between the tracks. … large amounts of coal dust accumulate rapidly…”

So let’s do the math. Multiplying the amount of coal projected to arrive at the Port of Coos Bay, which is 6 – 10 million tons per year, by BNSF’s suggested 3% product loss, this calculation suggests that coal trains would release as much as 300,000 tons of coal dust along its journey through Oregon. That is an immense amount of highly toxic coal dust every day of the year!

Due to the extreme weight of a coal train and its length of 125-150 cars, four to five locomotives are required to haul it. Therefore each train passing through Eugene has at least four times the emission pollution due to diesel particulate of a single-locomotive train.

Each train that comes through Eugene on the way to the coast must make a return trip over the same rail line. The communities along the tracks will get repeated exposure to the pollution, the noise and traffic jams for each coal train.

There’s strong evidence that diesel is a lot more poisonous than other types of particulate matter because emissions also contain toxic metals and carcinogenic hydrocarbons. The World Health Organization has declared diesel particulate to be a carcinogen. Over 40 studies have linked diesel exhaust to lung cancer, as well as cancers of the bladder and soft tissues. However, there are no federal standards specifically for diesel emissions.

Though it would be enough to raise our outrage if this issue just affected the areas closest to the train tracks, this is not a localized problem for people living in the Trainsong, or River Road neighborhoods. Pollution from coal trains would become a citywide hazard.

Extensive and costly studies of the health impacts to nearby communities has been done by the California Air Resources Board at many of California’s rail yards. The additional risk of cancer from breathing or absorbing toxic diesel particulate is increased to 25-100 times over the normal risk of getting cancer. Any resident living within 2 miles of the railyard is in a zone considered to be an unacceptable cancer risk (CA Air Resources Board).

What does that mean for us?

There are 27 schools within a 2-mile radius, 14 daycares and a number of senior living residences. A dramatic increase in coal train traffic through Eugene means significantly increased health risks for young children and adults alike!

The coal industry spends millions to sway Americans to give their support for more coal, euphemistically calling it “clean coal.

This is a public relations deception so, let’s not be fooled…the environmental and health costs necessary to mine it, transport it, burn it, and dispose of its waste make “clean coal” the equivalent of “happy heart attacks” or “friendly carcinogens.”

As writer Kathleen Dean Moore, a Distinguished Professor at Oregon State University, put it, “We have a moral obligation to avert future harms, so as to leave a world as rich in life and possibility as the world we inherited.”

Any way you look at it, coal should not be part of Oregon’s future. We have a duty to stand up and say, NO!

See the Stopping Coal in Oregon home page for more background on the issue.