BLOG: Helicopter herbicide sprays are poisoning Oregon…is it rigged or is it rogue? 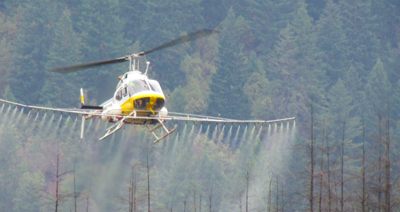 Two years ago, there was little public awareness about the common industrial practice of using helicopters to spray thousands of acres of forests with herbicides. That was before the Cedar Valley spray case in which over forty people reported being sickened by exposure to a chemical soup raining down from an aerial herbicide spray. After all, who could really imagine that Oregon’s timber companies routinely hire helicopter pilots, dozens of hazardous chemical truck drivers and pesticide applicators to carry out a program of blanketing forestlands and streams with toxic chemicals? It seemed unbelievable, until the public learned more.

When the brave folks from Cedar Valley came forward to tell their story, regulators and many legislators scoffed. “That’s just one rogue pilot, a solitary incident!” Industry lobbyists claimed, “We follow all applicable laws!”  However, now their claims have been blown out of the water by the Applebee Aviation case. Applebee handles a large percentage of the contracts for aerial herbicide sprays in Oregon. They are hired by companies ranging from privately-owned Seneca Jones Timber to the State Department of Forestry.

Applebee Aviation’s illegal activities were exposed by Darryl Ivy, an aviation mechanic and truck driver licensed to pilot hazardous waste trucks. He called Beyond Toxics for help after he attended one of our Herbicide and Health town hall meetings in Roseburg last April. He was very sick and he was shocked at what Applebee Aviation and Seneca Timber asked workers to do, and endure, as private forestry workers.  Ivy was working for Applebee Aviation driving trucks filled with jet fuel, pesticides and other chemicals on public roads and logging roads throughout southern Oregon. Ivy wasn’t really sure he wanted to call us, because he is a man used to working with dangerous chemicals in perilous situations like the North Slope of Alaska. What he witnessed compelled him to act.

Darryl Ivy on the phone with Oregon OSHA (Occupational Safety and Health) reviewing labels of the chemicals used on his job site while working for Applebee Aviation in Douglas County.

He took videos of illegal practices and handed them over to Rob Davis, investigative reporter at The Oregonian. That changed the whole game. Ivy documented what really happens behind the closed gates on private timber land – he exposed the lie that Oregon’s timber industry protects the environment. No longer are the pesticide and timber industry lobbyists able to circle the wagons to fend off the public's complaints. No longer can the Oregon Department of Agriculture and OR-OSHA sweep complaints under the rug and fail in their duties to protect the public. Now, Applebee is the focus of a spate of citations and fines for illegal activity issued by the Oregon departments of Agriculture (ODA), Transportation (ODOT), and Occupational Safety and Health Division (OR-OSHA). As of October 16, Applebee Aviation has been grounded and is being fined nearly $42,000. We hear there may be more fines to come.
Here is the real "elephant in the room," the problem so big that no one dares to talk about it!  Applebee helicopter pilots, chemical truck drivers and pesticide loaders were all being supervised by timber company executives and state agency personnel – while they were illegally spraying pesticides. Official regulators tasked with upholding the law merely watched and said nothing when workers were being sprayed, streams were being contaminated, and trucks were leaking herbicides (including atrazine, 2-4D, and glyphosate and more) on public roads and parking lots.

Are these isolated occurrences? No, indeed, they are part of a system that has turned a blind eye on public health and safety. Steve Owen, the pilot who sprayed 40 folks in Cedar Valley, or Mike Applebee, whose spray company has been grounded, are pesticide applicators who knew the system would allow them to get away with egregious acts of poisoning others for their own financial gain – with a very low risk of being caught.

Beyond Toxics is continuing to expose a corporate/industrial culture that ignores the law and ridicules folks who have been harmed by pesticide poisoning. I felt a sense of vindication and relief when I read Oregon Attorney General’s statement to a Circuit Court judge for the motion to request an injunction and restraining order for Applebee Aviation, stated that:

“The State of Oregon will suffer irreparable harm if Defendants (Applebee Aviation) are not restrained …. The joint investigation found that Applebee Aviation violated the State Pesticide Control Act by performing pesticide activities in a faulty, careless or negligent manner, thereby seriously endangering worker health and safety and presenting a serious risk to the public.” 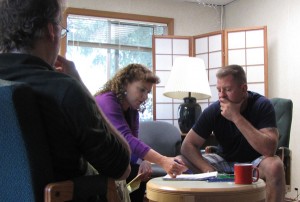 Board member David Bahr (left), Lisa Arkin, Beyond Toxics, Exec. Dir. (center) and Darryl Ivy (right) met on April 28th before he came forward to the press with his story.

“I’ve got blisters on my tongue, my neck and my arms,” Darryl told Beyond Toxics staff last April. “I feel like I can barely take a breath sometimes, and I’m coughing up blood. The helicopter keeps spraying us workers with herbicides and there is no place for us to hide.”
With guidance from Beyond Toxics, Ivy filed formal complaints with Oregon Department of Agriculture, OSHA, ODOT, and federal agencies. His photographic evidence, along with the media coverage and our policy discussions at the State Legislature, is compelling the regulatory action we now see.

This is the time to act and Beyond Toxics is ready. For the past decade, we’ve been helping workers and residents to seek justice. We’ve doggedly brought this issue to the attention of the EPA, state agencies, the Legislature and Governor’s office.  Beyond Toxics is the source of research and the media you’ve been reading about Douglas County, Triangle Lake, Cedar Valley, Tiller, Rockaway Beach and Florence.  We plan to do what is necessary to stop pesticide poisonings. We need your support to fully address the problem of aerial pesticide spraying and its havoc on health and ecosystem. Please become a member and take a stand now.