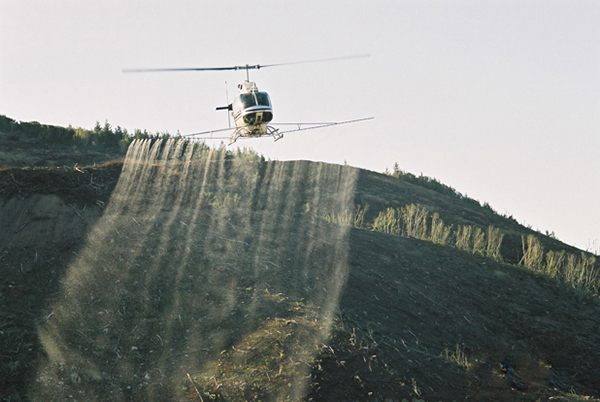 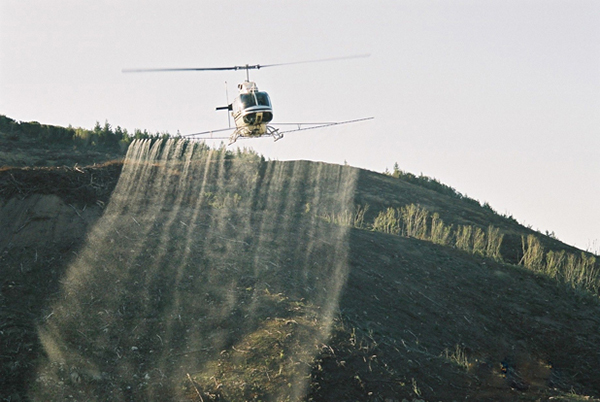 We’ve arrived at a moment when an agreement between corporate timber representatives and environmental health and forest protection defenders has been brokered. Perspectives on the value of such an agreement run the gamut, from Governor Brown’s pronouncement of “historic” to the angry claim of “shameless” by social media users. Beyond Toxics came at this with extreme caution because we understand the risks of compromise. We had to evaluate what was lost as a trade for benefits that move the marker closer to our goals: those of non toxic communities and healthy forest ecosystems.

The intent and legal aspects of this agreement, or “memorandum of understanding,” is codified in HB 4168-2. The bill has been set adrift in the stormy, contentious waters of Oregon’s 2020 Legislative Session. The bill passed out of the House Rules Committee last week only to be shunted to the Joint Ways and Means Committee, a place often referred to as “the legislation graveyard.” Whatever your stance on the wisdom of this agreement, there is every possibility that it will fail at one of the hurdles it faces. If HB 4168-2 fails to pass, the entire agreement is scrapped. This isn’t necessarily a setback, because a strong, dedicated coalition of environmental advocates have formed to pursue future policy battles. And there are 3 ballot measures ready to be launched to get a public vote on protecting Oregon’s forest waters. Fortunately, these ballot measures poll very, very well.

Where Does Beyond Toxics Stand?
With twelve years of forest and pesticide reform and rural community health advocacy and leadership to our credit, Beyond Toxics provided in-depth consultation to the negotiators from Oregon Wild and Wild Salmon Center on the timber pesticide and notification sections of the Enviro-Timber Agreement leading to HB 4168-2.
Beyond Toxics supports the agreement because, at the minimum, it establishes a policy floor below which Oregon will never sink. By signing on to this agreement and supporting HB 4168-2, timber companies openly acknowledge for the first time that they can (and should):

These are agreements that create a foundation of understanding about the need to update and reform Oregon’s forest practices laws. The agreement levels the playing field so that shared understandings, science and the experience of disproportionate burdens experienced by multiple communities are centered and valued in the next steps moving forward. Now, Oregon legislators have a stronger basis on which to end the current stalemate on pesticide reform and take meaningful action.

The Long Road to an Agreement: Our History of Statewide Activism of Timber Herbicide Use and Water Quality
Beyond Toxics’ early involvement in timber pesticide issues began in 2008 with support for a small group of rural residents called Forestland Dwellers. Led by Lynne Bowers, these folks were hand-coloring maps of where the aerial sprays were happening near their homes. From hand-colored maps and grassroots rallies in communities from Josephine to Tillamook counties, Beyond Toxics launched a science-based and ground-truthing approach. Soon we published our report, Oregon’s Industrial Forests and Herbicide Use: A Case Study of the Risk to People, Drinking Water and Salmon, a 2012 analysis and GIS mapping report on timber herbicide use in the Coastal range of West Lane County. This report provided the first fact-based understanding of herbicide sprays in industrial timberlands; the analysis was based on the spray records provided by timber companies. Our research exposed the multiple years of pesticide spraying the industry had previously denied and the chemical cocktail tank mixes never before revealed. We identified Atrazine, 2,4D, glyphosate and hexazinone as the top four herbicides sprayed in Oregon, contributing to a total of about a dozen poisons. We put together a multi-state comparison documenting how Oregon promotes the weakest forest practices laws in the Pacific Northwest (including Idaho and Alaska).

Then in 2013, Beyond Toxics documented the horrific aerial spray exposures that harmed over 30 people in Gold Beach, Curry County. We worked side-by-side with several residents to lift the voices of this rural community of loggers and blue-collar workers to the attention of state agencies and the Oregon Legislature. The rest of the nation learned about their plight through our video documentation, national media coverage, community health reports, and our petitions to federal agencies. 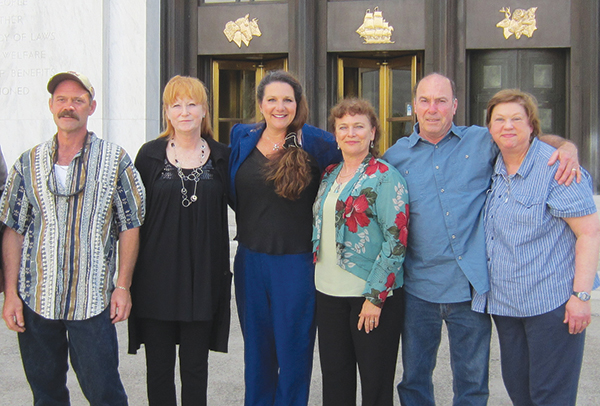 Together with this tightly-knit community, Beyond Toxics worked with Senator Michael Dembrow and former Representative Ann Lininger in 2015 to introduce SB 613, a bill to require advance spray notifications, buffer zones and more. We organized rural residents from nearly a dozen Oregon counties to travel to the State Legislature to testify and tell their stories of exposure to herbicide drift. It was an epic battle: working-class rural Oregonians versus corporate timber companies, at times attacked by their own legislators. We spoke truth to power to County Commissioners and legislators. 2015 was the session we raised the alarm about former Senator Jeff Kruse, who called his own constituents unsavory names on the floor of the Senate! (Senator Kruse was later ousted by the Legislature on charges of sexual harassment in 2018). Rob Davis, longtime reporter for The Oregonian, chronicled the fight for sensible forest laws. 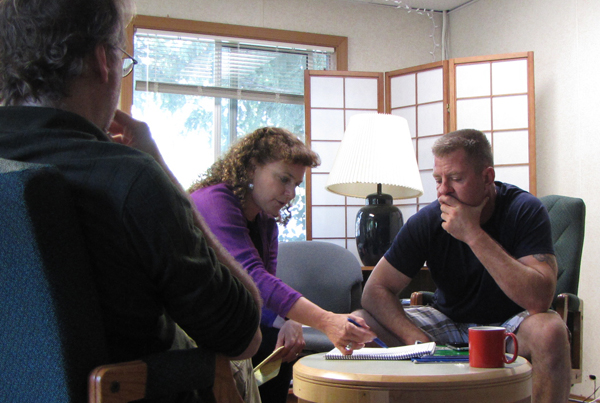 Former board member David Bahr (left), Lisa Arkin, Beyond Toxics, Executive Director (center) and Darryl Ivy (right) met in spring of 2015,  before he came forward to the press with his story.

Then in 2015 I met Darryl Ivy, an employee of Seneca, who attended a Beyond Toxics/Umpqua Watersheds Town Hall meeting in Roseburg with other employees. Darryl was the chemical tank truck driver who videotaped his and other workers’ exposures to aerial spray drift, took pictures of leaking herbicide tank trucks in public parking lots and was forced to mix pesticides with neither training nor a pesticide handler’s license. Darryl’s story had a profound impact on the path to exposing the timber industry’s lax practices and dismal worker protection standards. 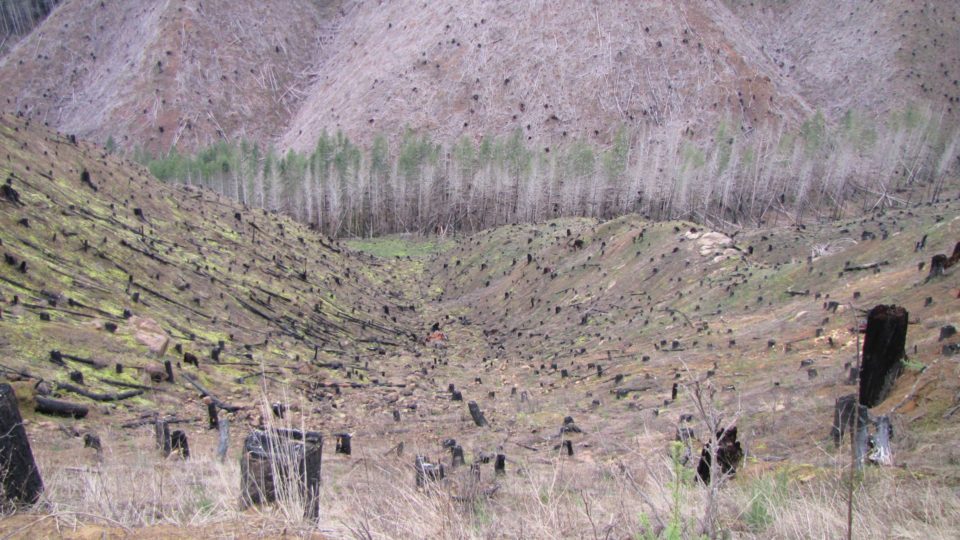 Photo taken at a clear-cut site in the Oregon Coast Range. Photo by David Tvedt.

Later that same year, Beyond Toxics was contacted by Nancy Webster, a Rockaway Beach resident, about their history of rampant clear cutting and aerial herbicide sprays resulting in contaminated municipal drinking water. We mapped her community’s watershed and actively supported the community’s grassroots efforts and their ongoing and highly successful community conversations series. The Rockaway Beach community and the Curry County residents joined us to testify in the State Legislature!

In 2017 we came back to the legislature, again with the guidance of Senator Dembrow, to lead the advocacy for forest practices reform bills. In that session we sought to address the public’s right to have advanced warnings about aerial sprays (SB 892), the right to have their day in court without the risk of owing potentially millions of dollars in attorney fees to timber companies (SB 500), and the right to file a claim of property damage or injury to health (SB 499).

Then in 2019 we presented the case and brought forward the concept to ban aerial sprays in state forests (SB 926). 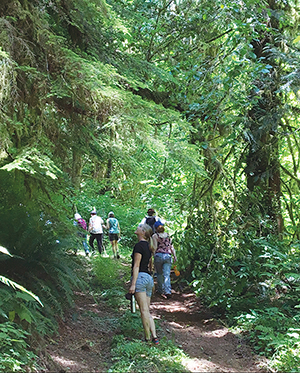 A tour of Shady Creek Forest, an example of a forest managed with resilient forestry practices in Lane County. Photo by Lisa Arkin.

In concert with residents from rural communities reeling from the harm they experience from timber pesticide sprays, Beyond Toxics spearheaded the earliest research, grassroots organizing, video documentaries, Resilient Forestry Tours and legislation - ultimately leading to the recognition of the central importance of spray drift to health of communities  and Oregon’s watersheds. Like tributaries flowing into the mighty river, it is a legacy of work that joins with the impressive efforts of conservation groups like Wild Salmon Center, Oregon Stream Protection Alliance, Oregon Wild and many others.

We’re proud of our legacy of leadership in healthy forests and healthy communities. Today we are also pleased to be working together with a larger coalition of environmental groups to break the proverbial logjam to progress. We have a remarkable opportunity to advance critical first steps towards lasting protections for forest waters and rural communities.

If we remain strong and united, Oregon will finally have a future where forests serve their highest functions as carbon sinks, wildlife habitats, sanctuaries for cool and clear running streams, sustainable logging harvests and places for recreation and reflection. This is all the more reason to believe that the signed agreement between timber and environmentalists will jump-start actions that benefit forests, protect watersheds and modernize Oregon’s approach to timber management.