Yes – Herbicides May Cause Cancer
Glyphosate is a weed-killing chemical that is found in a variety of commonplace herbicides, including Monsanto and Bayer AG’s Roundup. Over the past few years, the health and safety risks associated with spraying Roundup and other glyphosate-based herbicides have been called into question.

At the center of the discussion is the potential for Glyphosate to cause cancer in humans. In 2015, the International Agency for Research on Cancer (IARC) reported that glyphosate exposure can lead to the development of cancer. This classification, combined with the experience of Roundup users, triggered a wave of consumer lawsuits alleging that their cancer diagnoses were brought on by years of Roundup use.

Eugene Just Took Precautionary Action on Roundup
A retreat from Roundup is also taking place in cities and counties in the U.S. through policies and best practices guides. In June 2019, the City of Eugene decided to place a moratorium on the use of Roundup in order to protect public health (no end date). Their action was in response to the evidence of harm and the absence of federal regulations. This precautionary action is an increasingly common response from local governments who prioritize children’s health over misleading marketing campaigns from Monsanto and Bayer Chemical.

Roundup’s Active Ingredient, Glyphosate, is Everywhere
In Oregon, Roundup is sprayed in ways and in places that likely pose a health risk to people who may never have purchased or used the herbicide. Beyond Toxics recently participated in a study that measured residues of Roundup’s active ingredient, glyphosate, in family foods such as cereals, beans, apples and broccoli purchased at popular Oregon grocery stores. The report found that tested products–oat cereals, apples, applesauce, spinach and pinto beans–contained detectable amounts of glyphosate. The average level of glyphosate found in cereal samples gathered in Oregon (500 parts per billion) was more than 3 times the level set by scientists at Environmental Working Group for lifetime cancer risk for children. The average level of glyphosate found in pinto beans (507 ppb) was more than 4.5 times the benchmark. We’ve also reported that the Oregon Department of Forestry use helicopters to aerially spray a mixture of chemicals, including glyphosate mixed with other herbicides, on thousands of acres of clear cuts in state-designated protected drinking watersheds.

How can Oregonians grasp the potential harm to human health from the ubiquitous use of glyphosate products, such as Roundup, on the foods we eat, the water we drink and the playgrounds where our children play? As controversies continue to swirl around the safety of glyphosate, three significant courtroom cases presented enough evidence to convince their respective juries that Monsanto’s herbicide was the root cause of the plaintiffs’ cancers. Perhaps there are lessons we can learn from these cases that resulted in courtroom wins for the cancer victims.

Dewayne Johnson was diagnosed with terminal non-Hodgkin’s lymphoma after working at a school for years tending to the grounds, and attributes his illness to long-term exposure to Roundup. In 2018, he became the first person to take Monsanto to trial for its weed killer, attempting to prove to a jury that the agrochemical corporation was to blame for his cancer diagnosis.

During the trial, documents presented in court revealed evidence that the corporation had ghostwritten reports discussing the safety of Roundup and glyphosate and colluded with officials at the Environmental Protection Agency (EPA) to suppress research. Johnson was eventually awarded $78.5 million, and in April 2019 Bayer filed an appeal to throw out the final verdict.

In the first federal Roundup case against Monsanto, Edwin Hardeman claimed that his cancer diagnosis was caused by years of exposure to the herbicide. Hardeman’s trial brought forward several studies that analyzed the chemical makeup of Roundup and its potential link to cancer. After five days of deliberation, the U.S. jury awarded Hardeman $80 million in damages in March 2019.

Alva and Alberta Pilliod, a married couple in their 70s, were both diagnosed with non-Hodgkin’s lymphoma and linked their cancer developments to decades of Roundup use. The Pilliods claimed that Monsanto failed to warn its customers of the health risks associated with spraying Roundup by not properly labeling the product to wear protective gear, like goggles, gloves, or long pants, while handling the herbicide. In May 2019, they were awarded $2 billion by a California jury who found their cancer diagnoses were, in fact, caused by their many years of Roundup use.

Trials in Monsanto’s Midst
New evidence appears to surface reinforcing the probable link between glyphosate and cancer. This past April, Washington State University (WSU) researchers discovered second-and third-generation offspring of rats that were exposed to glyphosate developed a variety of health problems, including prostate, kidney, and ovarian diseases, obesity, and birth abnormalities. This phenomenon, known as “generational toxicity,” suggests that one generation of humans that actively uses Roundup and other glyphosate-based weed killers can impact the health of their descendants.

As corporations often do, Monsanto and Bayer AG continue to assert that Roundup does not cause cancer or pose a threat to human health. With three court cases down, Roundup’s original manufacturer, Monsanto, still faces thousands of consumer lawsuits ahead. As long as Roundup continues to be used and sold in the United States and worldwide, Monsanto will continue to face those who have been affected by its toxic herbicide. 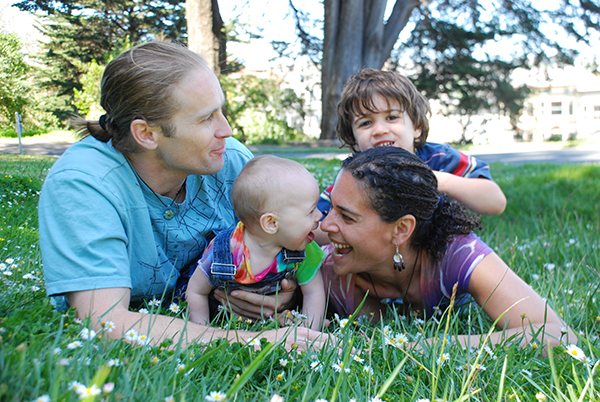 Families should feel confident their children are safe when they play in neighborhood parks.

There are positive actions we can take outside the courtroom! Beyond Toxics is growing our grassroots project, Non Toxic Oregon, a program that supports cities and schools in their effort to adopt organic land care practices. Four Oregon cities: Springfield, Eugene and Talent are transitioning park land to organic land management systems.

In the interest of all of us—the health of working people told to spray pesticides as part of their job and the child rolling on the grass, we must choose a different path. The Monsanto/Bayer trials give us ample proof that the potential risk to cancer and a growing list of serious health abnormalities is too real to ignore.

We encourage you to get involved in these campaigns! If you are inspired by a vision of a future free of toxic risks, please invite us to your city or organization to learn how to bring a Non Toxic approach to land care!