Dorris Ranch is a popular public park in Springfield and one of my favorite places to walk trails through a historic orchard and along the Willamette River. Although I have seen people picking blackberries and foraging for other edible plants and fungi in the forest near the orchard, I have never given much thought to pesticides that might be used there. I have always felt that the public should not have to be concerned about chemical hazards in public places with open access.

Last summer, I noticed that a community member was posting concerns about heavy pesticide use in the orchard on social media. This person also called on the Willamalane Parks District to stop all pesticide use. They reached out to Beyond Toxics and we began communicating with Willamalane Parks and Recreation District managers about the pesticides used at Dorris Ranch and concerns from the public. 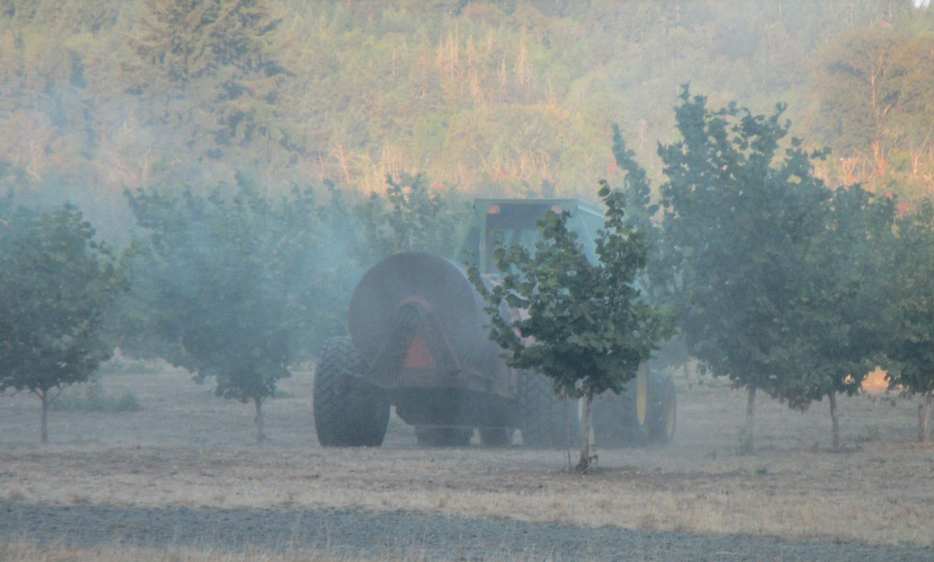 The orchard gets a pesticide (Asana XL) application from an air blaster. (Aug. 2021) Photo courtesy of the Oregon Department of Agriculture.

Lisa Arkin, Beyond Toxics Executive Director and I met with the concerned community member who raised the issue. They lived in the Springfield neighborhood between the Dorris Ranch orchard and the Willamette River. The neighborhood is beautiful. A few dozen homes have backyards along the property line of the Dorris Ranch hazelnut orchard, divided only by a flimsy chain link fence.

We walked through the neighborhood and chatted with a few residents the evening before the scheduled spray. A few people were aware there was going to be work done in the orchard but were unaware of any details. Considering the proximity of the orchard to the homes during the spray, with only a barrier of a chain link fence, it was apparent that it would be nearly impossible for them to avoid pesticide residue reaching the homes. 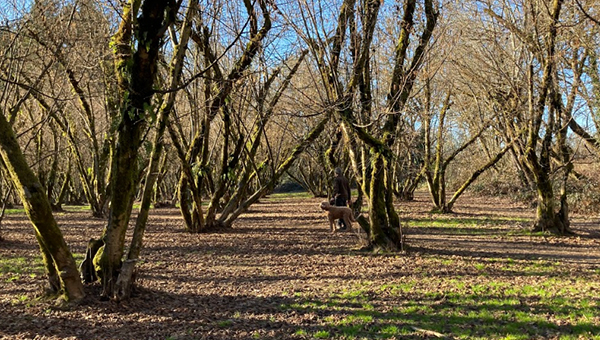 Lisa's dog, Rafa, runs in the orchard with one of his companions. Photo by Lisa Arkin

My experience taught me that such pesticide use, along with the inevitable spray drift and the proximity to the neighboring properties represented a significant risk for exposure. We got permission from local residents to set out pesticides drift sample trays in their yards before the spray.

The ODA investigator took lots of photos to document the spray and noted the temperature throughout the day, as pesticides can often volatilize at higher temperatures. The Willamette Valley was under an extreme heat wave during this time.

The investigator noted open windows at homes next to the orchard with fans blowing air inside during the spray. The ODA investigator documented barely legible notes by the orchardist that served as two years of pesticide application records at the orchard.

The next day we collected our sample trays and plant leaf samples from the backyards after the spray happened and sent them to a lab to test for pesticides. When we received the results from the lab, we were not surprised to see low levels of pesticide residue detected on one of the samples. We sent the lab results to ODA to show that pesticide drift had reached the homes outside the orchard. The ODA returned to collect their own vegetation samples from the yard at the same residence where we found drift and also inside the orchard. The resident had since removed the squash plant where we took our samples and the samples collected by the ODA nearly a month later did not detect pesticide residue at the residence. However, high levels of pesticide residue were still present on the orchard trees. This pesticide is labeled to cause skin irritation and there is ZERO tolerance for residue on food and it should not be accessible in a public park.

In September, a month after the last spray, Willamalane reached out to Beyond Toxics and interested community members and invited us to participate in an Ad Hoc Advisory Committee to make recommendations to the Willamalane Board of Directors about changes in orchard management practices. Committee members included a representative from the National Parks Service, who advised the committee about the historic values of the Dorris Ranch Park and orchard and cultural landscape. A horticulture expert from OSU provided options on Integrated Pest Managament (IPM) practices including pest trapping and monitoring, and less toxic pesticides for each pest throughout the growing season. An organic hazelnut farmer provided a presentation about organic management of hazelnuts through harvest, processing and marketing. Beyond Toxics advocated for better signage and public notice to neighbors and park visitors, better recordkeeping, and most importantly, we focused on developing a community value of non-toxic public spaces.

On December 1, 2021 the AdHoc Committee recommended that the District transition the Dorris Ranch hazelnut orchard to organic management. The Willamalane Board of Directors voted on December 8, 2021 to immediately discontinue using the most hazardous pesticides used in the orchard in favor of less toxic products. They also requested Willamalane staff to obtain further information about the cost of transitioning to organic. 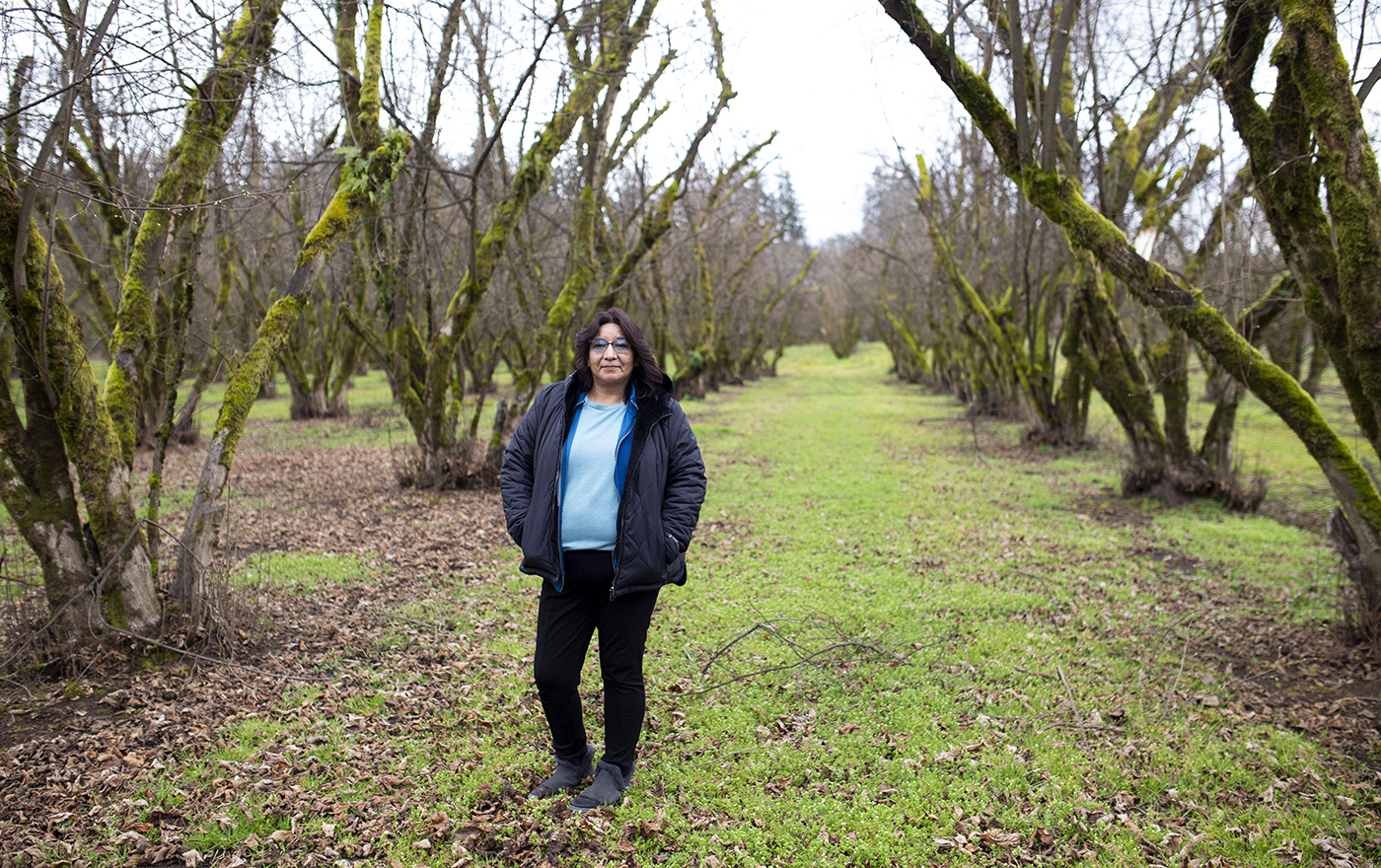 A New Season, a New Start

As spring approaches, I’ve returned to the trails at Dorris Ranch. I feel so heartened to see the beginning of new life in the orchard. Nineteen acres of blight-infected trees have now been removed and replaced with a variety of blight-resistant baby hazelnut trees. The most immediate benefit  will be to reduce the amount of pesticides used at the orchard. I’m looking forward to seeing the other changes still to come. My sincere hope is that, with the involvement of citizen power, Beyond Toxics can help make Dorris Ranch a safer public space for visitors and neighbors, pets and wildlife.

Find out more about the panel that will dive into the issue more deeply at the 40th Annual Public Interest Environmental Law Conference: "Water, Pollinators & Public Spaces: A Local Model for Collaborative Pesticide Policy Reform" on Friday, March 4th, from 1:30-2:30 pm. 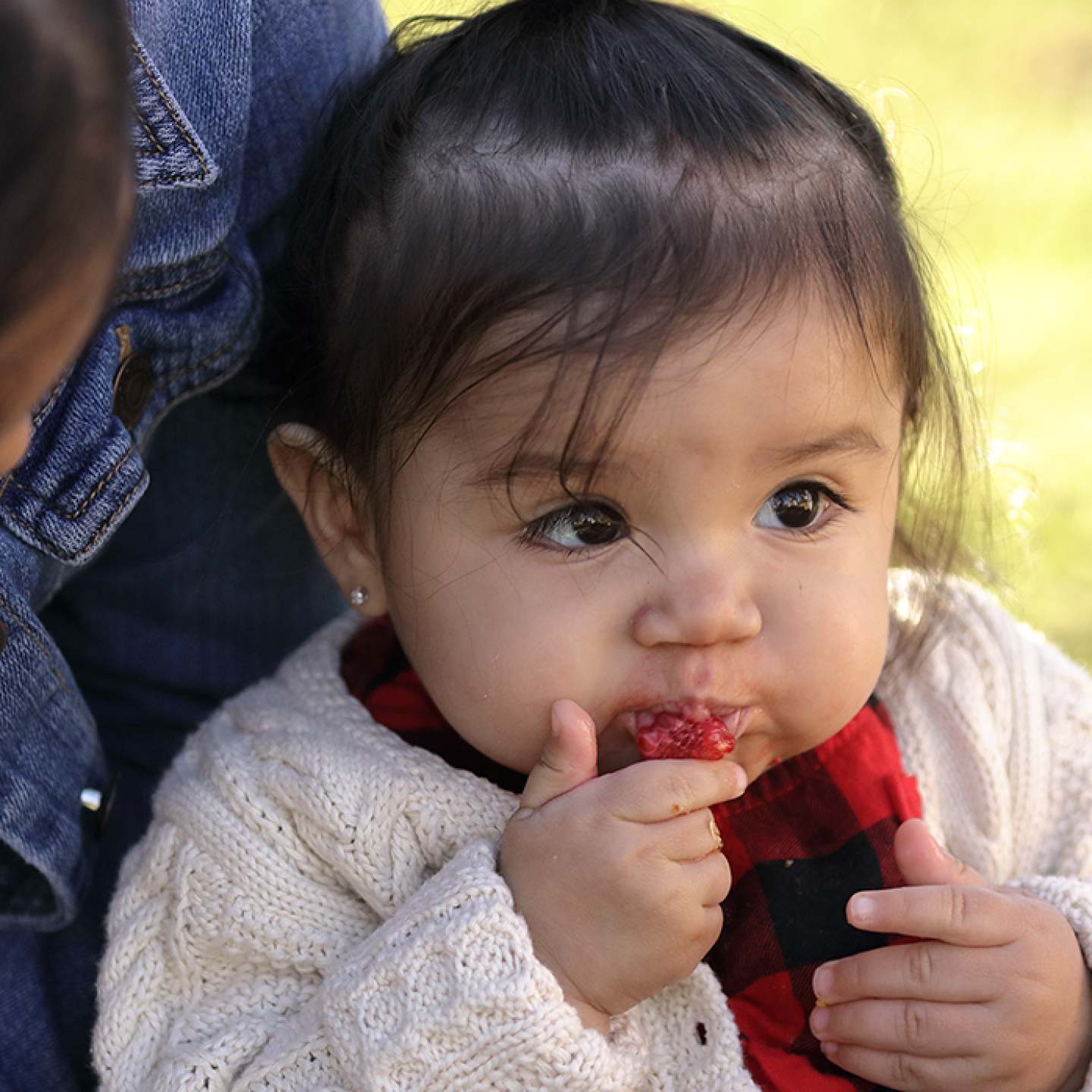 Today we celebrate the EPA’s August 18th decision to END the use of chlorpyrifos on all food crops, a ban that will also apply to Oregon.

We won! And Bayer Chemical lost!

On May 9th, Oregon became the first state in the country to restrict the use of Aminocyclopyrachlor (ACP), an herbicide marketed to kill weeds that ends up killing trees. In Oregon, ACP killed 2,000 majestic old-growth trees. This deadly chemical reportedly travels underground along tree root systems, passing the poison from tree to tree, and continuing to kill trees long after and far away from the original pesticide application. 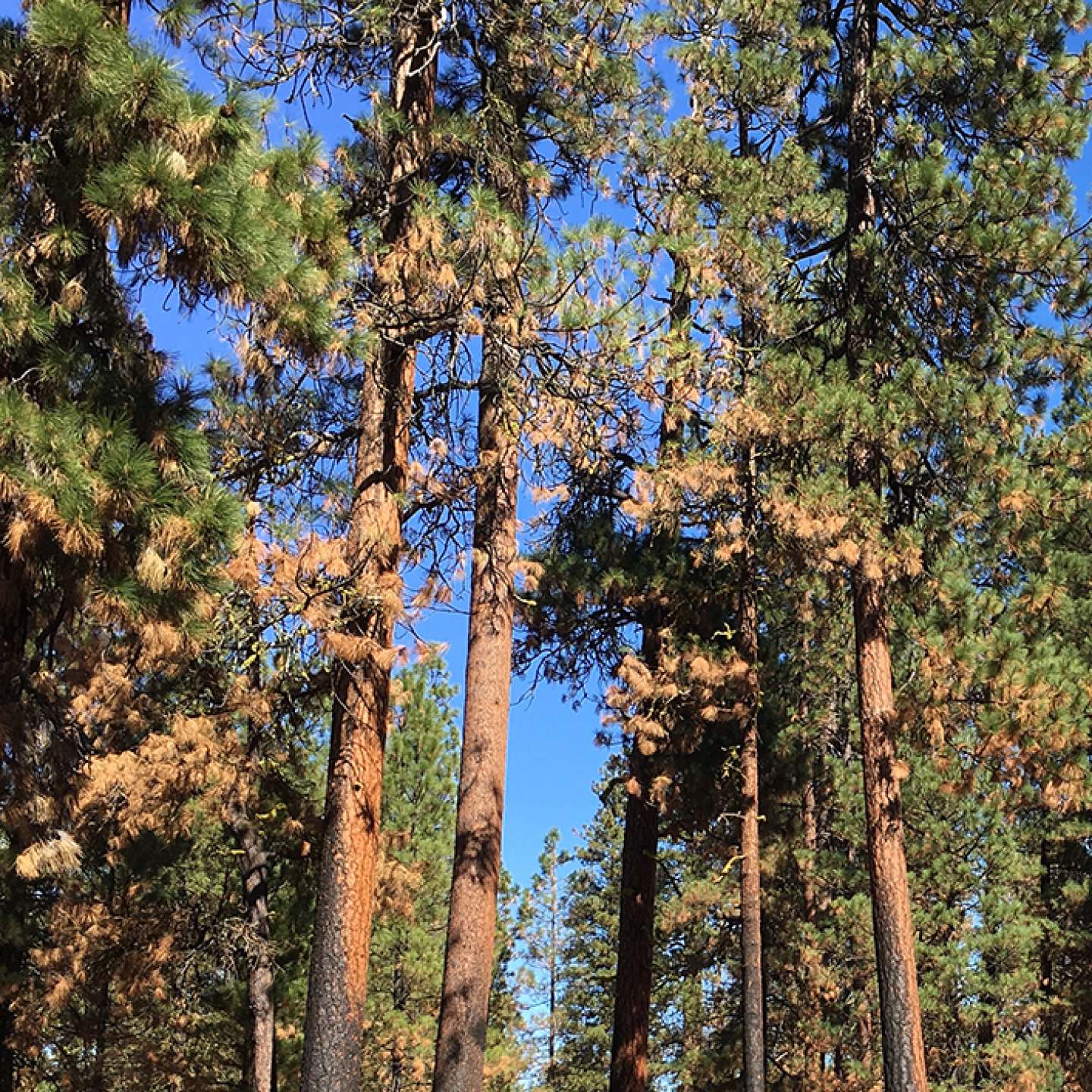 It may be easier to be concerned about wolves, salmon and eagles perishing than it is to feel remorse over dying Ponderosa pine trees. Yet, the presence of giant, old growth Ponderosas in central Oregon is as emblematic of a place as any furry, swimming or flying creature. 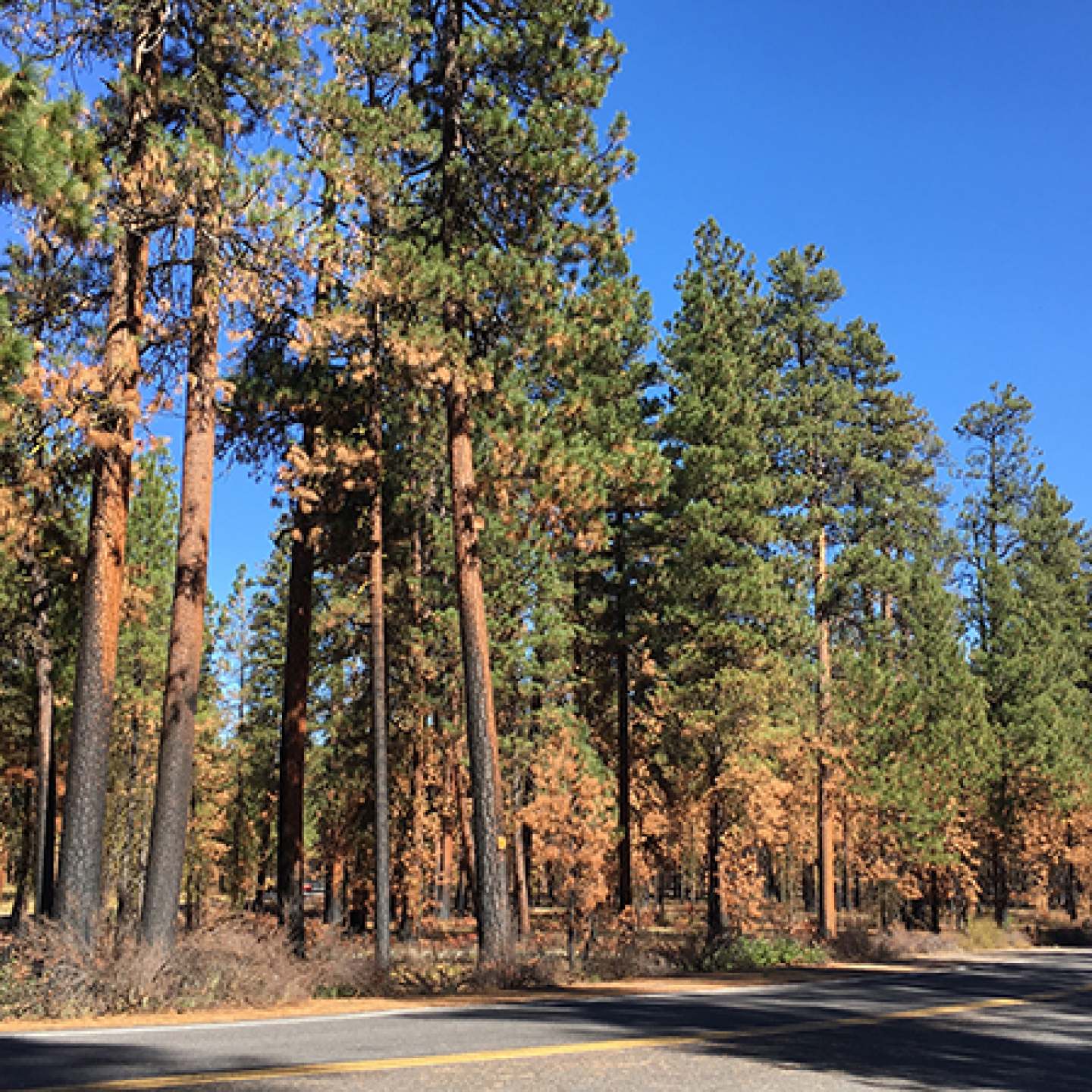 Oregon state and county agencies have breached the law and the majestic Ponderosa pines of Eastern Oregon are dying as a result. The already-parched and receding aquifers are at risk as well.